The 1960's: The True Disney Decade at Disneyland 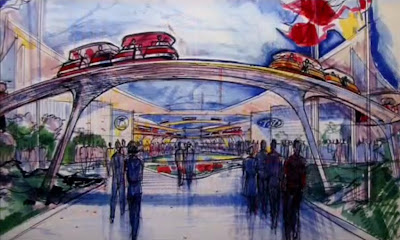 Disneyland's Tomorrowland 1967 was a world on the move, and this very rare and stunning piece of concept art for the Peoplemover shows exactly what the Imagineers planned. Noticeably missing is the Rocket Jets, but the rendering was meant to highlight the new mode of transportation. Even if the Peoplemover train was once only two cars long.

It's difficult to admit as a Disney theme park fan, but the 1960's were the ultimate peak decade for Walt Disney's original Magic Kingdom. That's 50 plus years ago! There were projects both small such as adding Snow White's grotto to those groundbreaking new technologies such as Audio-Animatronics first debuting in Adventureland's The Enchanted Tiki Room. This was only the beginning of a wonderfully fruitful and innovative season!

Then toss in It's a Small World into Fantasyland straight from the 1964 World's Fair, a fan favorite that's still delighting kids of all ages. Next up was New Orleans Square, quickly followed by what park fans still refer to as the best example of Disney Imagineering: Pirates of the Caribbean. 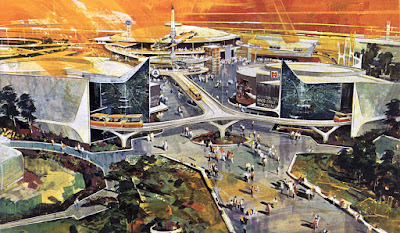 A brand new Tomorrowland followed, updating the land and bringing it into the future: Adventure Thru Inner Space took us into the atom while the legendary Carousel of Progress gave us a humorous look backward and forward. The Monorail and Skyway had new competition with the super popular Wedway Peoplemover providing yet another way for guests to get an overview of the land and its attractions.

The Real Disney Decade ended in 1969 with the long awaited Haunted Mansion on the banks of the Rivers of America. So many iconic attractions first came into being during the real Disney Decade. All under Walt's direction and leadership- when giving guests more than they expected was the mantra.

Never again would Disney leadership give guests such an amazing decade for Disneyland Park. As good as it will be, I sincerely doubt the opening of Star Wars: Galaxy's Edge is the beginning of another amazing decade, even 50 years later.