20 Years of California Adventure- The Good, The Bad, and The Very Ugly! 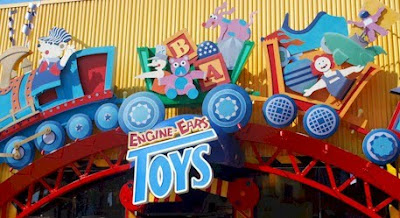 With much anticipation, California Adventure opened twenty years ago- to an instant negative response for good reason. It was the park we Disney fans loved to hate. Having visited two days in a row during the opening year, it wasn't until the second day that I understood the truth: Disney was trying to go head to head with Six Flags Magic Mountain and was not interested in offering a classic Disney theme park experience. 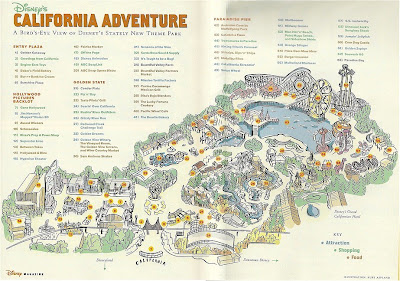 To all who believe in the power of dreams... welcome. Disney's California Adventure opens its golden gates to you. Here we pay tribute to the dreamers of the past... The native people, explorers, immigrants, aviators, entrepreneurs and entertainers who built the Golden State. And we salute a new generation of dreamers who are creating the wonders of tomorrow ... From the silver screen to the computer screen ... From the fertile farmlands to the far reaches of space. Disney's California Adventure celebrates the richness and the diversity of California ... Its land, its people, its spirit and, above all, the dreams that it continues to inspire.
Disney California Adventure Dedication Speech
-- February 8, 2001 , Michael Eisner
The well crafted words above cannot hide the truth. That's not to say there weren't glimpses of beautiful work to be found on opening day. Unfortunately, only the very small Grizzly Peak and Condor Flats areas of the park had charm and potential. The rest, including a warehouse looking entry area named Sunshine Plaza, screamed cheap, fast, and uninspired- an insult to Disney fans. 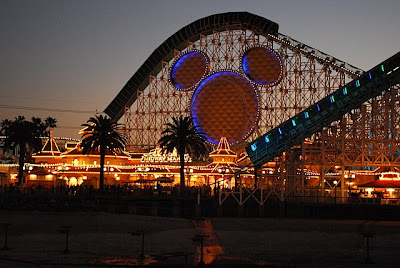 Paradise Pier was an ugly carnival saved by one great roller coaster, and the Hollywood Pictures Backlot was so bad that the ironically epic Superstar Limo (below) became the poster child for theme park failure. 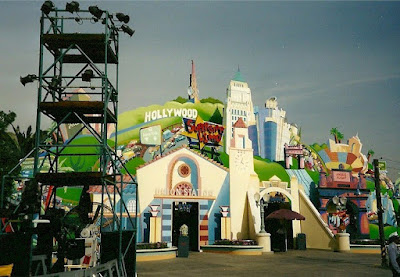 Ultimately, the second California park couldn't decide exactly what it was. When an ugly carnival made up the largest piece of real estate in the park, the studios hypes backlot resembles a junkyard with all the exposed steel, and most of the attractions are carnival rides, films, or retreads from Florida, there's a problem. Wait! There's a tractor display. Wow.
The blame lay with the suits, not the Imagineers. Michael Eisner, fighting an economic battle to constantly be earning more than every before and increasing stock value, seemed to have lost faith in the very artists that made the Disney name synonymous with quality. The truth is the ultimate betrayal would be known months after opening the park when the jaw dropping and much acclaimed Tokyo Disneysea opened in Japan. It became the instant gold standard of which all theme park are measured against. But then again, Oriental Land Company funded the project, not Disney.
It took trying to improve the park by adding quick fixes like the kid friendly Bug's Land and a cheaper version of Twilight Zone Tower of Terror for the suits to finally realize they had mandated a park that few would visit. Under Robert Iger's leadership, they announced a redesign in 2007, letting the Imagineers finally Get to work on something high quality. Admittedly to mixed results, but overall a great improvement. 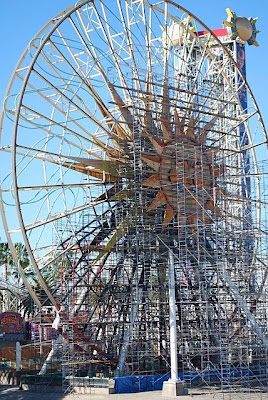 With the transformation ongoing for almost five years, the newly rebuilt park hit its peak in 2012 with the opening of Buena Vista Street and Cars Land, featuring the must-do attraction Radiator Springs Racers. The crowds came in and seemed to stay. In the next five years, the park almost doubled attendance compared to the opening year numbers. 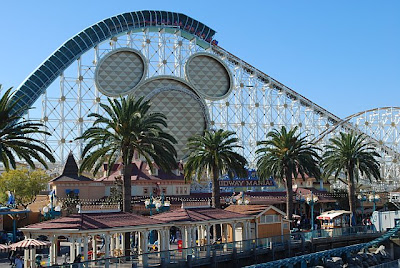 Unfortunately, that same peak year would lead to a drastic downturn in quality Imagineering in the park once the crowds came in. The once steadily improving carnival area was given an even cheaper and unnecessary overlay into Pixar Pier, capping off a series of changes to the park that lessened the great experience that looked promising just a few years before. Where I once happily spent a full day there, my last visit in 2019 lasted just a couple of hours, and I had enough. Off to Walt's park next door for the high quality I'd come to expect. 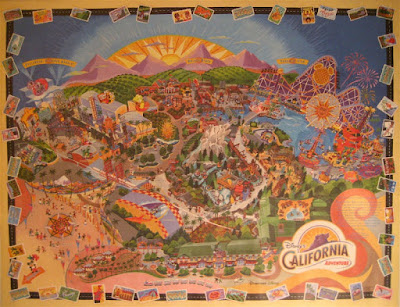 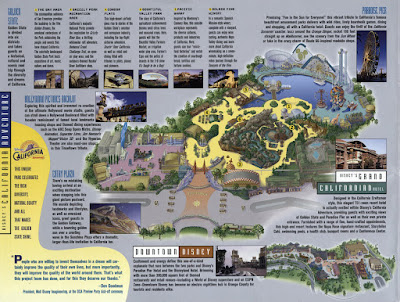 Inside the park guide map.
Revealing a small park with a mix of some nicely designed elements
among a slate of off the shelf attractions and re-run films.
Will the very ugly continue? Will the park continue its downhill slide or will smarter minds prevail and begin adding high quality, epic Disney attractions to its roster? Hard to say. Current leader Bob Chapek seems hellbent in destroying what makes Disney parks great. While Universal parks are becoming more like Disney's greatest work, Disney California Adventure now aims to be more like Universal of old. A definite step backwards.
-----


There are a number of articles on this site that chronicle the transformation of the park through a look at Disney concept art. Take a peek at Bargain Basement Imagineering beginning here.


Part Three (with the beginning of the park transformation can be found here.