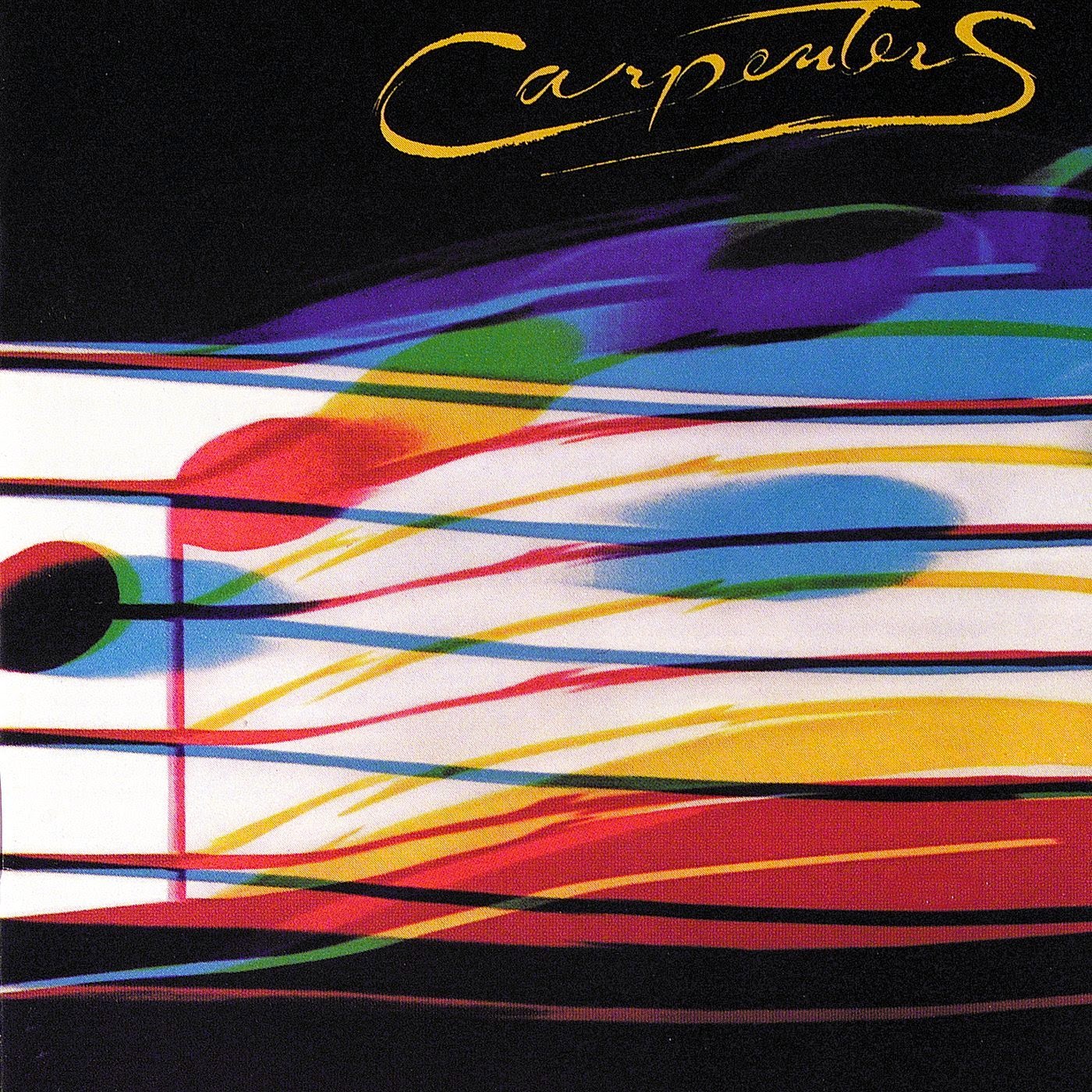 The time for change had come.

With the prior studio album both a sales and creative disappointment, Richard and Karen Carpenter- and the A&M Records executives- knew it was time to inject something fresh and attention grabbing into their career. "A Kind of Hush" was a wonderfully warm album but one out of touch with the record buying audience fascinated with new sounds being created across the country and around the world. Disco was quickly becoming popular with artists like Donna Summer and KC and the Sunshine Band beginning their reign on the charts. Fans had moved on, and the Carpenters had to show them they were growing with them.

Their live disc from London's Palladium sold well and quickly, testifying to the duo's skill at reproducing their records before an audience. Yet, in person, it was also a live performance of surprising energy, something their latter studio output seemed to be lacking. It was time to translate some of that to disc. So, off to work they went!

At the creative helm, Richard bravely made startling- some would say drastic- choices for the new recording. For the first time, they would cross the threshold into disco, albeit with a light playful romp not too far from traditional Carpenter territory. All You Get from Love is a Love Song was the catchy and underrated first single. Poorly promoted with an ad campaign equally dire and unappealing, the new single barely cracked the Top 40, yet its swing, upbeat vocal performance and terrific saxophone line brought a bright and delightful freshness along with that dance beat. Karen and Richard sounded like they were having real fun, something that was missing from the previous singles. 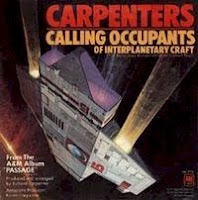 If fans and disc jockeys alike had barely noticed the first release, the second choice was jarring enough to make just about everyone stand up and take notice: "Calling Occupants of Interplanetary Craft" remains the oddest choice ever for their recording career. Playing on Richard's love of Sci-Fi and the popularity of the megahit movie Star Wars, the timing was at once perfect and an obvious display of following the leader. The promotion of the single, however, was groundbreaking.

The accompanying long form video for Occupants was created a full five years before Michael Jackson would do the same for his song Thriller, a fact overlooked by critics when they are busy accessing the work of Karen and Richard or considering who belongs in the Rock and Roll Hall of Fame. Once again, as during a good portion of their career, Karen and Richard made some surprising choices and usually made them ahead of the pack.

Although the science fiction song was not the blockbuster hit they needed in their homeland, things were different elsewhere. In the United Kingdom, the Carpenters discovered the single to be quite popular, and the song stayed on the British charts for quite the duration. 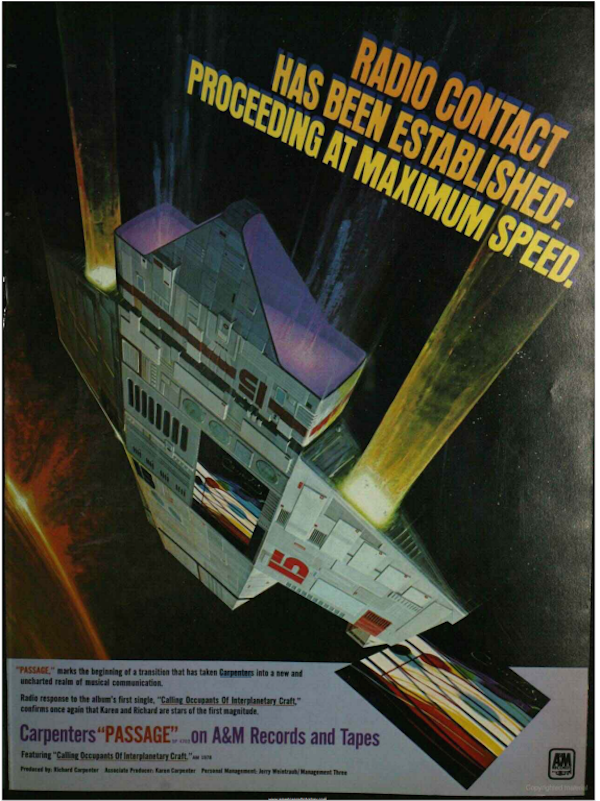 Ad for the album in Billboard magazine.

When the full length album, Passage, was finally released, fans and music industry executives discovered the remake of Klaatu's spacey anthem to be just a taste of the many musical styles represented. From the bold choice of Michael Frank's Bwana She No Home as opening number going forward, this disc was different. 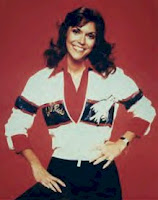 As a long time fan, I found the album both strangely satisfying and disappointing. It was great fun to hear Karen and Richard stretch and successfully perform so many different types of songs. On the other hand, the disc felt like a letdown, as there were not many traditional choices to be heard- and there was not one single Carpenter/Bettis composition to be found. Even the album jacket, photography and artwork broke from the past. Here, there was no elegant Carpenters logo on the front of the jacket, no photograph of the duo, instead an eclectic piece of artwork for the cover. 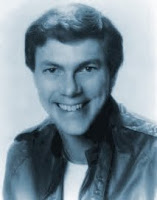 Thankfully, the liner notes were extensive although quite congratulatory. Yet rightfully so. Even the Los Angeles Times critic Robert Hilburn reviewed the disc and found it appealing. A new found measure of acceptance and respect was found from their critics. By releasing a disc that broke preconceived ideas established by the Carpenters earlier choices, folks had to reconsider the duo. It was just what Richard had hoped would happen. 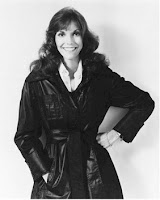 Occupants was not the only stunner to be found on Passage. The true emotional centerpiece of the album was another unlikely choice. Long before Madonna covered the primary song from the pop opera Evita, Karen's performance of Don't Cry for Me Argentina was found here- and it is without a peer. As gorgeous as it is on record, it was even better live. I heard Karen perform the song in concert a month before the album was finally released. Her live reading of Argentina was at once strong, tender, and heartbreaking. For a singer known for the softness of her voice, the power and range of Karen's vocal abilities cannot be understated. Each nuance of the anthem was played to full effect. Every note perfect with Karen in control. Just beautiful! 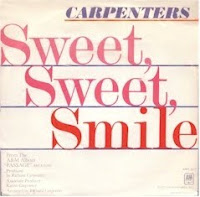 In spite of such notoriety, the album still did not break the sales spell the Carpenters seemed to be under. The last single was yet another bold choice. Juice Newton's Sweet, Sweet Smile eschewed the expected release of I Just Fall in Love Again, a radio perfect traditional Carpenter ballad. One of the cleverest ads for Carpenters music ever.

Smile played well to country music fans, selling enough copies to make the duo consider producing an entire disc of the genre, but even the extremely innovative ad campaign using the Mona Lisa couldn't generate enough sales to make the song appear on the pop charts. It was enough, however, to make them consider a country album for another release in the future. 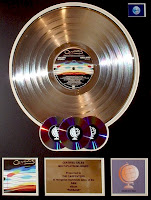 Although Passage generated decent but not great sales numbers worldwide, in the United States, the album soon faded into the background among other higher profile Christmas releases.

Passage marks the transition of one season in their career to another: from highly successful and chart-topping to that of artists needing a hit and on the comeback trail. At this point, Karen and Richard's personal lives were unraveling, but they would return the following year with one of the most beloved and acclaimed albums of their career. A Christmas album- a disc the duo felt they were created to make- that would become an enduring masterpiece.

My life was changing as well, and Passage was a turning point of sorts...
------
This post on Passage is part of my series reviewing each Carpenters album in the order released. You can begin reading with my review of Offering / Ticket to Ride here.
-----

2021 Note: This is part of a continuing series of posts on the albums of Karen and Richard Carpenter. There are also numerous stand alone posts highlights different aspects of their career, recordings, and life.
Below is the list of my initial reviews and then my "Revisited /Fresh Look" reviews a decade later.