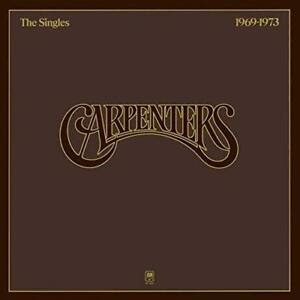 It was the end of an era, but fans of Richard and Karen Carpenter didn't even see it coming. With hit single after hit single, and a string of best selling album releases all over the world, Carpenters were hotter than hot. They were such a strong act that the thought of putting out a greatest hits album that listed the years in the title didn't come across as arrogant or unwise. It was assumed by fans everywhere that the hits would keep on coming.

I was among those absolutely sure the best was yet to come. From the opening notes of We've Only Just Begun in 1970 to the latest smash, Top of the World, I anxiously awaited and purchased each new release and followed them up the Billboard charts and the weekly Top 40 on 93KHJ radio broadcast out of Los Angeles. Yes, I was that nerdy. I still am, actually, but I've given up on the Billboard charts. 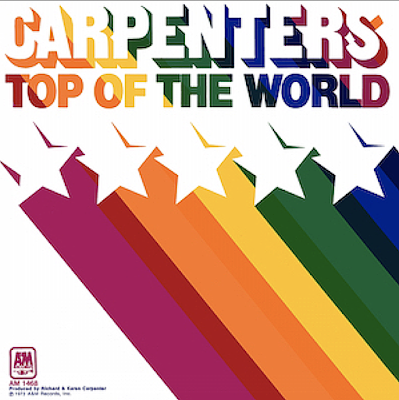 A worldwide smash long delayed.
When the new single Top of the World was released in September of 1973, Karen and Richard's Now & Then album sat at Number 30 on the charts in its 25th week of release. Meanwhile, the Yesterday Once More single was still on the Billboard charts at #35, peaking at Number 2 several weeks prior. It kept the duo from receiving another Number One because Jim Croce's iconic Bad, Bad Leroy Brown had captured the interest of the public.
I was very surprised to hear the duo's record in a new pop friendly form, but I was not the only one to recognize the Richard and John Bettis written song was a hit in the making. Country artist Lynn Anderson's cover of Top debuted at #74 a few weeks prior to the Carpenters version hit the radio and the record shops. With its release, my hopes of a full length version of an oldie from Now & Then vanished. As good as the new Top of the World was, I wondered why they would next release a song from 1972.  It soon all made sense. 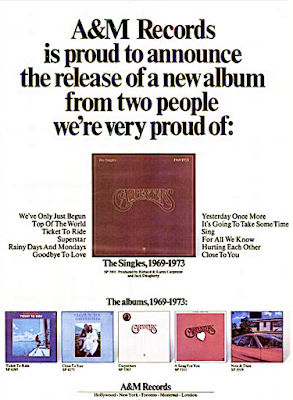 November 17th, 1973 Billboard magazine ad.
The new hit would anchor the duo's first greatest hits collection. Having never been aware of an artist doing such a thing, even though I was more than willing to add another album to my growing collection, I had no idea that Richard and Karen had something more in mind than just gathering the hits all together. I was about to be pleasantly shocked.
As with all others, I pulled out the LP and placed in on the home stereo. The back of the jacket said We've Only Just Begun was the opening song, but instead, I heard Karen on Close to You. What? Had they made a mistake with the pressing? Soon enough, I realized Richard had designed something very special. The mini-medley/interlude was lush and beautifully orchestrated. A piece of magic totally unexpected. Years later, I realized the elegant opening introduction was the spiritual predecessor to what would come later in his Pianist, Arranger, Composer, Conductor solo album, and then again to even fuller fruition on the duo's 2019's collaboration with the Royal Philharmonic Orchestra.
It wasn't only that slice of music that seemed timeless yet so far removed from the radio sounds of the day. The liner notes by Digby Diehl unintentionally further cemented Karen and Richard's pop status by comparing their songs to the classic Smoke Gets in Your Eyes. Written in 1933 and sung by many artists- most notably Nat King Cole- the song is iconic, but the comparison did the Carpenters no immediate favors by equating them to the past. Even as a teen, I thought this manner of celebrating their accomplishments was just very odd.
Earlier in May, the Carpenters invitation to the White House at the request of President Nixon and a later appearance on a Bob Hope television special only reinforced in people's minds that Karen and Richard's appeal was primarily to an older - and unhip - generation. That would change one day, but only after Karen's passing. But back to the album. 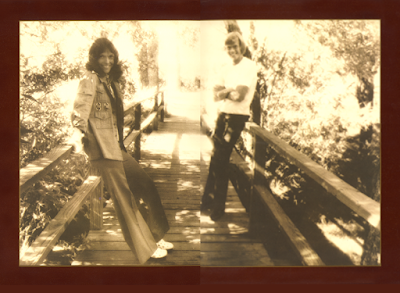 Interior photo of the album.
The second cut was the new and improved Top of the World. I expected nothing special from here on out, but a revision of the Beatles hit Ticket to Ride shimmered with a brand new vocal by Karen. Richer, warmer, and far more polished than the 1969 original found on Offering or the album of the same name. Tony Peluso's added guitar parts along with Richard's other musical improvements, created something stunning. I fully thought this might be the follow-up single. It was that good and much more in tune with what they now sounded like.
By this point, I was really taking notice of what I thought would be a simple collection of songs I'd heard hundreds of times. The last three cuts on Side One, Superstar, Rainy Days and Mondays, and Goodbye to Love were now artfully sequenced in an unexpected presentation and with some new vocal work by Karen to tie it all together. What a majestic ending to the first side! I couldn't wait to turn it over to see what else Richard had up his sleeve.
Unfortunately, Side Two had nothing new apart from the enhanced single version of Yesterday Once More which had additional guitar work. Making it unique from the cut found on Now & Then, this was one more reason to purchase this particular album. Still, there was one hit after another before the collection ended with the one that started it all. Richard may have been the architect of the duo's musical sound but in hindsight, from 1972 forward, Tony Peluso became the interior decorator of sorts who brought the bling home. Not a bad move on the duo's part. 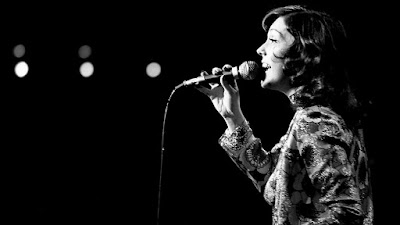 While her voice is what many fans appreciate most,
Richard's genius behind the scenes showcased it wonderfully!
Strategically timed for the Christmas season and the perfect gift for those hard to please folks, The Singles 1969 - 1973 made a steady and rather rapid ascent up the charts. After a month and a half in release, it reached Number One for two weeks, knocking Elton John's Goodbye Yellow Brick Road from the peak. It also topped the British charts. 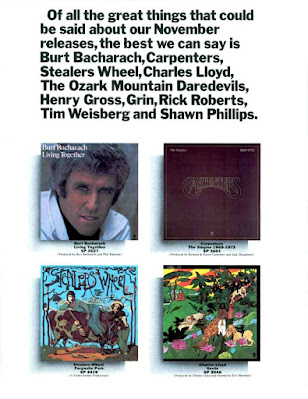 Another A&M Records ad which included Karen and Richard.
By putting all their hits together on one album, including so many that had sold a million copies or more, Richard and Karen instantly communicated their enduring stamp on the American musical landscape. Certainly, they were no "One Hit Wonder"! They were just as big in Europe and especially in Japan, where they remain at the top of the charts to this day.
After such artistry and a wide variety in material on this greatest hits album, I was a bigger fan than ever. What would come next? Something that would shock and surprise me, but not in a good way... and the beginning of a downhill slide in Stateside popularity and sales.
Regardless, in listening to this album many, many times in preparation for this review, The Singles 1969 -1973 stands among the finest of all albums, greatest hits collections or otherwise. Digby Diehl was correct in his assessment. The music is timeless and elegant and worthy of its place among the Great American Songbook. Be it a first listen on the new Target stores "Coke Bottle Vinyl" or playing it for the 500th time on the original A&M release, you'll once again be in awe of the sheer artistry - and impact - of two young artists in their mid-twenties.
------
This is part of a continuing series of posts on the albums of Karen and Richard Carpenter. Below is the list of my initial reviews and then my "Revisited /Fresh Look" reviews a decade later.

Another excellent look at actually my favorite Carpenters album! This is the one that got me started on looking at their music, after finding "Lovelines." Of course I had to have the album that had HCL! I think this is really the first artistic statement made by Richard on an album. The sequencing, the two newly remixed/recorded updates of TOTW and TTR. It provided the template for him to expand on in future releases, especially after Karen was gone.

Pretty astute insights! Be sure to search for all the other posts on Karen and Richard. There's more here than just these album reviews. Thanks for reading!