With the gates to Disney's Animal Kingdom finally open, it was time for the company to watch and measure guest reaction to all the hard work of the Imagineers, with the end result being a precarious mix of entertainment and education. This was not the Magic Kingdom but one belonging to mostly real and not robotic animals, so a certain amount of realism was expected.

In this regard, Animal Kingdom aligns itself much more with Epcot than with the Magic Kingdom or the Studios. The latter two parks place a heavy emphasis on pure fun and entertainment, but underneath Epcot’s incredible pavilions are doses of philosophy mixed with Disney magic dubbed “edutainment”. The same holds true with this park. It may be subtle, but it is always present.

The stunning Oasis Gardens at the entrance to the park conveyed a serious message from a design standpoint: this park was meant for exploration of the unexpected. The lush jungle, multiple paths and creative and seemingly barrier-free animal habitats caught the paying public by surprise. By intentional design, the Imagineers communicated this park was more than a collection of highly themed and easily accessible adventures; it was as much about slowing down and discovery as it was about delivering the expected Disney theme park experience. 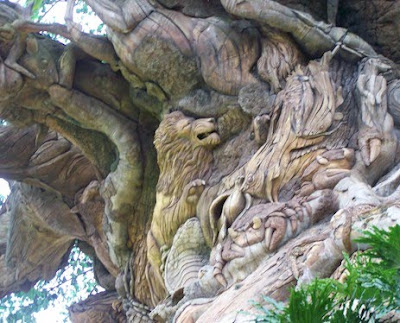 Having meandered through the gardens and passing small waterfalls, delighted (or shocked) visitors strolled over a bridge to see a towering tree before them. The park's icon, The Tree of Life, rose from the landscape, bringing an immediate reaction of oohs and ahs. Upon closer inspection, the appreciation became more accute as discoveries of over three hundred animals were found carved into its huge trunk and branches.

The structure was a stunning success, every bit a peer of the beautiful castle in the Magic Kingdom or the breathtaking Spaceship Earth at Epcot. The difference at Animal Kingdom? Guests could see those defining buildings from far away whereas The Tree of Life was designed to be discovered only once in the park. Just one more variation from what Walt Disney Imagineering had accomplished previously; another break from the past. Further exploration around the Tree beckoned. The boat journey along the river enticed, but the lure of the African safari- in a space as big as the entire Magic Kingdom- pulled guests away from the colorful Safari Village and right to the gates of Africa. Exotically authentic architecture, the sounds of musicians playing, and cast members from African nations drew guests in. This clearly wasn't Adventureland!

Boarding the safari jeeps at the far end of the area, the 20 minute journey thrilled riders with views into the continent long offered only to a privileged few. Not only had the Disney landscapers done a magnificent job of creating another world in Central Florida, the investment of time and energy by those designing new enclosures that seemed non-existent yeilded a very "open" experience for guests with the animals on view. This single attraction instantly became the must-see experience in all Walt Disney World. Kilimanjaro Safaris was a hit, and the lengthy queues testified to its popularity.

Once departing the showstopping attraction in Africa, guests left the safari jeeps and journeyed onto the Gorilla Falls Exploration Trail (now named Pangani Forest Exploration Trail). In this verdant valley, a troop of incredible creatures roam freely within yards of the path. All open air, seemingly within arms reach. Nearby, an excursion aboard the Wildlife Express trains to Conservation Station, Disney's behind the scenes visitor center, impresses guests with their top-notch animal care facilities. 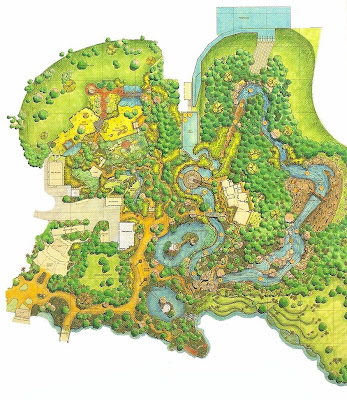 Moving on down the way, the Flights of Wonder bird show is found at the outpost of the soon to open Asia section of the park. In a few months, when guests can enter the village, they’ll discover another exploration trail revealing tigers, bats, and komodo dragons as well as an exciting but very brief white water rapid ride. After our safari, my family continued down the exploration trail. Before reaching the gorillas, we encountered a large variety of other creatures both large and small, hippos to small birds. Like many families, we had seen The Lion King movie and were familiar with Timon, the meercat. Seeing a real life meercat was fascinating, and our kids had noses pressed to the glass watching him move about. Display cases and walls showed important bits of information regarding their life and the other animals around them. Time went by quickly, but it was necessary to move on. Going from Africa into Asia, sounds of rushing water and screaming people were soon heard. Of course, we knew this meant we were close by to the Kali River Rapids, and we jumped into line to wait for our turn. I eventually noticed that this version of Asia was not the Japan or China showcases of Epcot but instead a very realistic and earthy representation of a variety of other nations and cultures.


The detail found in the queue overwhelmed us. Everywhere we looked, layers upon layers of storytelling dazzled us. The anticipation of the ride made us patiently wait through the lengthy delay. Actually, the queue was the best part of the attraction as the cruise itself ran very short with little of that Disney attention to detail we saw in line. Such a disappointment! Yet, the Animal Kingdom is such a warm park that having a soaking wet body did provide some relief from the relentless Florida sun. 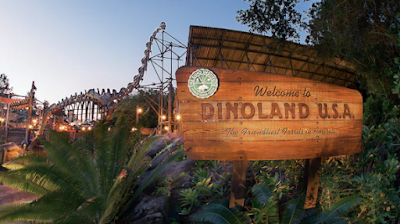 We skipped the Maharajah Jungle Trek, saving it for a later visit instead choosing to go to Dinoland U.S.A. Navigating the park at this point in time was not an easy thing to do. Just as in Rome, all roads seem to lead back to Safari Island and the Tree of Life. For as large a park, the actual pedestrian areas are very small, sometimes even cramped depending on the crowds, and the route back to Dinoland U.S.A. took some time but it yielded additional views of the park icon. 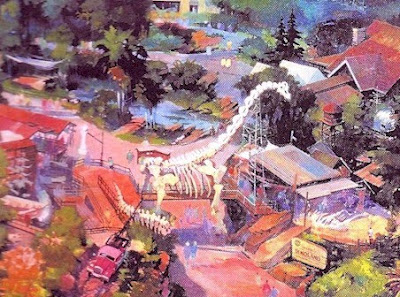 Having completed the tour of the areas celebrating real animals and finishing this within a couple of hours, we ventured on to Dinoland, U.S.A., seeking encounters with those creatures prehistoric and extinct. Countdown to Extinction, a time machine journey gone awry, is the premier Audio-Animatronic attraction here. 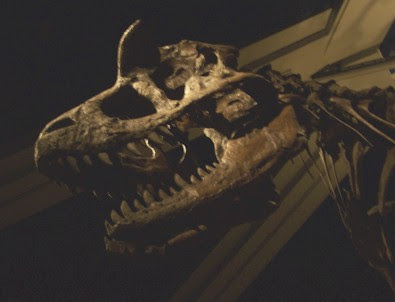 The museum setting for the attraction is quite effective in establishing the tone and feel of what is to come. As we waited in the queue, appropriately placed artifacts and detailed murals presented prehistoric life. Eventually, the lights dimmed as the narrator revealed the story of these incredible creatures. Keen eyed observers will notice the large dinosaur skeleton in the rotunda is in fact what guests will encounter later in the flesh; a discovery lost on us until our second journey.

It is a fast-paced, very loud, and quite scary adventure. We were shocked by the intensity of everything we encountered, but suffice it to say, this is not the mild cousin of the dinosaurs found in Disneyland's Primeval World section of the railroad! My kids took the whole adventure in stride, but my wife and I were surprised by how frightening the trip was- and we wanted to warn parents with small children to bypass the attraction.

The layout of the track is an exact copy of the popular Indiana Jones Adventure in Disneyland, a concession to rising costs associated with building Animal Kingdom. Competitively, it is a direct answer to the Jurassic Park attractions planned at Universal’s Islands of Adventure. It is a compelling trip, however, and once we got over our jitters, we reentered the line for another journey. Seldom seen piece of art for Countdown to Extinction

Once we left the attraction, we wandered through the main store. The Chester and Hester's souvenir stand is a huge establishment. We loved the quirky charm, loads of punny detail, and unique merchandise. 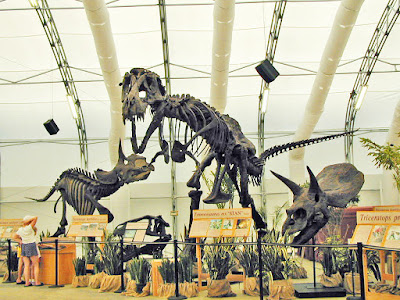 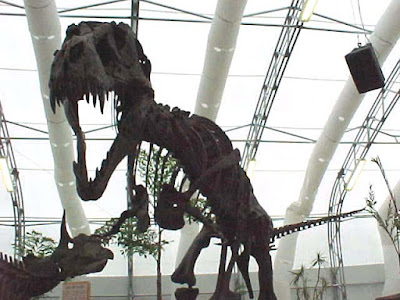 The Dinosaur Jubilee was a rather quickly thrown together exhibit of bones, housed in a tent, in an area that would be the precursor to the forthcoming Chester and Hester's Dinorama carnival. We were not even aware this existed. It wasn't until years after our return that we know this existed. 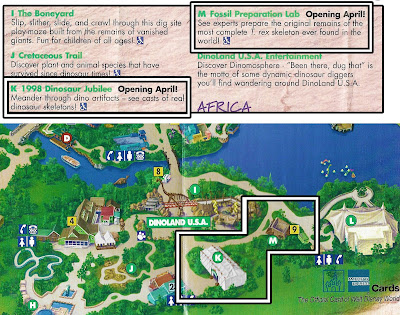 Map of Dinosaur Jubilee from DiscoveryRiverBoats.com

Like much of the park at opening, Dinoland U.S.A. left quite a bit to be desired. It felt unfinished - as it does to this day.

As it was later in the day, hunger propelled us to some great food at Safari Island's Flame Tree Barbecue, so we quickly passed through the rest of the area to find it. The meat was surprisingly good- and this became something else we noticed at the park. The food quality and variety was way above the norm, especially compared to the culinary boredom found in both the Magic Kingdom and in Disney-MGM Studios. Perusing the park map, we realized we had missed the last showing of both the Lion King extravaganza and Flights of Wonder. What was left? Only It's Tough to Be a Bug, so off we went.

As we expected, this 3D show was entertaining, full of in-house effects as well as educational. But it was also pretty brief, and we left the Tree of Life theater understanding we had seen all we were going to see for the day. No matter as the park closed at 5pm. We did feel a bit cheated by the short hours and low attraction count. We were not alone. Comments from visitors began to reach the offices of the Disney company. 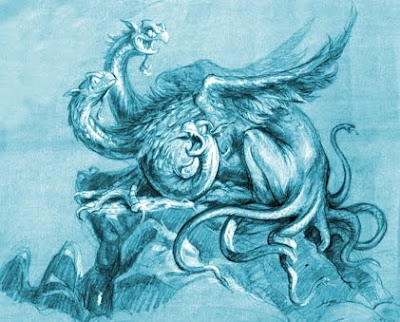 Although most customers anticipated large doses of realism, they also expected equal amounts of Disney magic and fantasy. Early promotional materials featured mythical beasts. Guests were not only expecting them given their experience with the three previous parks, but they also saw promise of them at the park entrance where iconic imagery of dragons were found along with those of creatures real and extinct. It was even stated on the dedication plaque at the front of the park. Guests were primed and ready for the experience. Although the land devoted to imaginary animals fell victim to the accountants red pen, this change was not made clear to guests, and many fans walked away from a day in the park very disappointed after realizing attractions based on fanicful animals were no where to be found. The best laid plans of mice and men fell to leave behind only indications of Disney's intent- an unseen firebreathing dragon along the river with a few other set pieces but nothing more.

There were other cuts made from this park- an outdoor roller coaster set for Dinoland U.S.A., and a vastly extended water rapids ride than the one finally opened shortly after the park's debut. Above- Disney's Animal Kingdom at Opening

Other guests were painfully aware of the park's shortcomings. The persistent “half-day park” assessment, the early closing time, a lack of Disney quality Audio-Animatronic attractions, and the perception that Animal Kingdom was nothing more than a zoo.  All this combined to keep attendance levels lower than the executives in Burbank desired. In fact, by some reports, attendance figures dropped for two to four consecutive years after the park opened.

Although short on cash for expansion, new plans were developed with varying degrees of success in acceptance and execution. And that is a tale for the next chapter of the Animal Kingdom story.