Heading out again to the east side of Oahu this past weekend, I ended up shooting both the sunrise  (at Hanauma Bay) and sunset (in Hawaii Kai). During the intervals between shots while I'm waiting for subtle changes in the light, I'm often standing alone before beautiful and powerfully captivating scenery. In those quiet times, these views remind me of the majesty and sheer awesomeness of our Lord God! On the way back home, my car radio was set to a Christian station where the topic of the sermon was Grace and Mercy. As I began processing the images, I thought maybe I could link these two subjects together. It's probably a bit of a stretch, but I wanted to give it the old college try!

Sunrise was shot overlooking Hanauma Bay. It's a destination spot for visitors thanks to the natural protective barrier formed of coral reef which provides a safe habitat for over 400 different species of fish. Of course, the reef didn't protect the marine life from man itself, and by the late 1980's, serious damage had been done to the environment. Preservation measures and stricter guidelines were enforced to help bring the area back to acceptable levels. 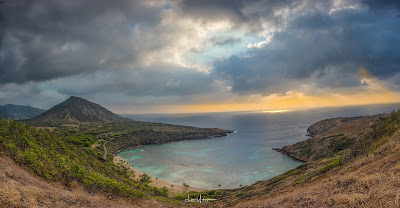 God's grace, by definition, is His giving us blessings and gifts even though we don't deserve it. It can be innumerous things such as health, family, friends, wealth, love, and joy. As sinners, we certainly don't deserve any of it, but God in His grace, still bestows it upon us. A sunrise is a good analogy of this grace as the sun appears over the horizon, flooding the world with its live giving rays and warmth. We often take it for granted, but it's there, every morning like clockwork. So is God's grace, He is constantly showering us with His gifts and blessings without missing a beat.

Sunset was photographed above Hawaii Kai. Once an area of wetlands and ponds, the district was developed into a living community by Henry J Kaiser. Much of this was done through intense dredging of the land. It's ironic that prior to the transformation, land value toward the eastern side of the island was considered nearly worthless. Now, you would be lucky to buy a small 3 bedroom home there for under a million dollars.

Mercy is God NOT giving us what we deserve. Without mercy and the sacrifice of our Lord and Savior Jesus Christ, we would be subjected to a high degree of punishment and suffering. But like the sunset that covers the land in darkness, Christ's blood covers our sins so that it is no longer seen by God.

Okay, that's a bit of a stretch analogy wise, but it allowed me to cover two of my favorite subjects, God and photography.

Hope everyone is having a blessed start to the week!

Len- what a stunning way to visually show God's grace and mercy towards us! Your words are well put. I think you're better than you think you are in so many ways. You are such a blessing, Len. Praise Our God and Father for his everlasting goodness!