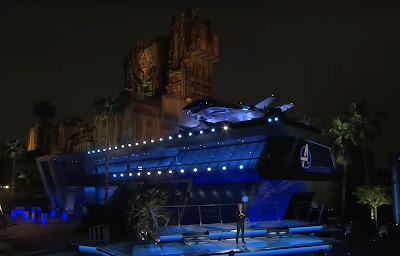 How do you take Marvel, one of the most successful of all movie franchises, and turn it into failure? Open Avengers Campus at Disney California Adventure with a slightly improved Toy Story Mania as your main draw.  WEB Slingers- A Spider-Man Adventure should be so much more than it is. But this is Imagineering of the 2020's and certainly not work found under the original first generation or the often equally talented second generation. Shops and restaurants play a big part here where they should take on a supporting role.
Viewing the Disney Parks Blog live stream of the grand opening, it is easy to see the Imagineers were hamstrung by the budgets and the direction given from the suits, and the enthusiasm for the new land was as manufactured as could be. Until grander plans come to fruition, Avengers Campus will be for die hard fans and little kids used to Saturday morning cartoons. So much potential wasted.
Posted by Mark at Wednesday, June 02, 2021

Indeed such a waste of limited land at dca, it feels like we are back at the disappointing projects imagineering was up to 20 years ago...
Such a shame they expect to fix the Walt Disney Studios in Paris with the same uninspired ride as I expect the other as boring Frozen and Star Wars Land to be delayed for a few years
Also I’m not sure money is the only reason for a lack of inspiration... They should stop asking people exiting the park what they want to see or not and start again to design rides from a blank page, even if there is a specific IP attached to the project

You provide some very timely insight as to why this was the wrong move for the suits and Imagineering! They should have just wiped clean the Backlot at DCA and built a whole new land. I would have been willing to see Monsters go (even though I really enjoy it) for something more grand and inspired. Maybe it will get better and bigger once the Eastern Gateway project it settled. We shall see, right?

I like the idea of turning the whole backlot into a Marvel land. Seeing how the movie franchise has brought so much money to the mouse compared to Star Wars in the last decade, it’s surprising they didn’t and came up with such an underwhelming land in a pre-COVID project, even taking into account the postponed/cancelled E-ticket avengers ride.
If they remove the backlot though, then they’ll really have to come up with a new name for the park, which I wouldn’t mind anyway
Until then, I’ll pass on planning another trip to DLR to be honest

It will take more than this version of a Marvel land to get me to go back to DCA. Disneyland, however, I'd visit in a minute!