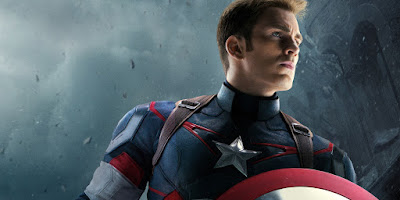 Take this news for what it is: Gay fans and political groups are approaching Marvel executives and calling out for the very single Captain America to be given a boyfriend. All coming from the same groups that are asking, almost demanding, that Frozen's Elsa be given a girlfriend.

The answer needs to be "No." Back in the day when things were less open, Stan Lee could have made the Captain intentionally sexually ambiguous, but he did not. Let's stay with the original content and honor those who created him. These fans asking for the boyfriend should be ashamed of themselves for wanting to change a classic piece of comic and film art to suit their political agenda.

Will Disney ever make a gay hero or heroine? I'm sure the time will come, but it certainly is not now for this iconic hero.
Posted by Mark at Tuesday, May 24, 2016

I cannot fathom why you (or anyone else) are so threatened by this idea.

Did it bother you when Nick Fury became African-American? When M from James Bond became a woman? The great thing about art of all forms is that it can change with the times and be interpreted in new ways. All of these characters are from a time when most things were created by white male heterosexuals and reflected that singular perspective. They no longer reflect our more open and diverse world.

And if Captain America dates a guy, it doesn't erase any relationships in his past with women. He could simply be sexually fluid, or just have never met the right guy yet!

Just for the record, I have read articles on your site since you were listed on Disney News Central, I'm not just searching for posts on this subject to comment about.

Yes, actually. Its another reason as to why I don't like "Forrest Gump". Revisionist stuff has never appealed to me.
Thanks for reading! :)

The thing with Nick Furry being black or M being a woman Isn't that relevant in this case imo, because these changes did not impact the overall story, or the characters, they exist because the people who made the flicks were confident these actors would do a great job at portraying the characters and they did.

Giving Captain America a boyfriend isn't wrong because you're suddenly making Cap gay, but simply because it doesn't have any signifcant relation to the story we've been told so far, far from it, it would even make it loose heart.

Making Cap in love with Bucky kinda undermines the whole story arc we've followed for three films, now all Cap would have gone through would have simply been because he loves the dude. So far, what made these movies very poignant was the fact that Cap's doing all this for his childhood friend, his brother, both in arms and in heart.

Giving Cap a boyfriend just seems to be one of those cases where people want to do it just for the sake of it, jumping on the Elsa Bandwagon. The whole issue feels obnoxious.

I'd rather see a whole new super-hero, with a brand new storyline, who'd happen to be gay, or bi, wether they make a big deal about it or no would be up to the writer's decision, but if it has to be a big deal, then make it a part of the storyline, use it to tell a compelling story, that would not only resonate with gays, bis, but also straight people.

Making Cap suddenly gay would just feel shoehorned-in, non linear, non organic story-telling. We've been following the character's story for decades now, and suddenly discovering he's had a thing for bucky all these years feels like a cheap twist, just to make bucks and please the crowds.

Or if you really want a gay or bi Captain America, why not any Captain America ? Why Steve Rogers ? There have been numerous characters who donned the mantle of the Stars and Stripes Hero, from bucky, to his other pal' Falcon. If it really is about using a symbol, reinventing it, then let's make a new Captain America altogether. That would be to me, he best solution, because if we do follow what your saying, that these characters were created by white male heterosexuals, and ar no longer reflecting our more open and diverse world, then that means these characters are no longer relevant to some degree. So let's make new ones.

Well thought out, The Juke Joiners. Thanks for reading!

I didn't argue that Cap should be with Bucky (in fact, I really would rather this did not happen) - just that if Steve Rogers had a new love interest - as these characters get ALL THE TIME - if it happened that this love interest were male, it does not change anything fundamental about the character. I agree the Bucky angle would change a lot in the existing storyline, it would be messy. I have no interest in that.

I'm not even arguing in favor of this campaign, just that blanket opposition to the very thought of Steve Rogers kissing a guy is at best close-minded and at worst offensive.

There are countless people who have romantic relationships throughout their lives with people who are not strictly one sex or gender. It does not make them different people than they had been before.