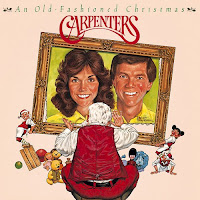 After Karen's tragic passing in 1983, I knew the days of the Carpenters were sadly over. Instinctively, I expected greatest hits compilations, perhaps one disc of unreleased material, and an eventual solo project from Richard. An Old Fashioned Christmas came as a surprise to me when it was released in the fall of the following year. The beautiful Voice of the Heart album had only been in release for a year, but I suppose it made sense to Richard and the executives of A&M Records to release another disc so soon.

In my memory, I recalled multiple but unused songs being recorded for Christmas Portrait when it was first intended as a double length album. I was still quite surprised and very delighted to find Richard had finished work on a second volume of Christmas music. It had to have been a very difficult labor of love for him.

It was still a season of vinyl then, even though compact discs had made their way into the market. There was no accompanying disc to be found for this release- only chrome tape for the cassette release- therefore, my first view of the album cover was large in scale as well as being wonderful to behold. It was another artistic take on the Norman Rockwell look and feel of the first disc's cover, but as with the music it contains, not nearly as charming or effective. I do appreciate the slight nod to Karen's well known love of Disneyland, as the elf on the right wears a pair of Mickey Mouse ears!

Similarly to the 1978 album, Richard begins the proceedings with a crisply sung "It Came Upon A Midnight Clear". After a quite lengthy choral and instrumental medley that includes slivers of Richard's vocals, the title song arrives, offering sweet sentiments but a fairly mundane melody, arrangement, and performance. Written in 1984 for this collection, An Old Fashioned Christmas is a nice composition with long time lyricist John Bettis, but it is not a classic to be cherished.

Immediately thereafter, Richard's stunning instrumental reading of "O Holy Night" begins. It is a powerful piece of music masterfully played. This is my favorite Christmas song, and few singers effectively capture the substance and drama of the lyrics.

Richard's performance of it is so well done, I do not miss the words. In fact, it seems to bring me to a place of worship for the God who became Man for our sake. Not many instrumentals have that effect on me! In fact, for his part, it's Richard's skills as pianist that are his strength here throughout the album.

After about fifteen minutes of music, Karen finally steps in. When her warm, gorgeous voice comes in on "Home for the Holidays", showcasing her lower register. It's in that deep part of her range that reminds no other singer can compare to her! Hearing Karen, the game instantly changes, reminding the listener this is a Carpenters album! She immediately brings a cheeriness, a buoyancy to the disc but also an instant and underlying sadness as we remember she is gone. The tune is quite charming but brief at a length of just over two minutes. Here is the pattern of this album: lots of Richard, little of Karen. By necessity, on an album comprising roughly 49 minutes of music, Karen's vocals make up only about 18 minutes total!

Richard's next instrumental medley is a bright blending of "Here Comes Santa Claus", "Frosty the Snowman", "Rudolph the Red-Nosed Reindeer", and "Good King Wenceslas". It feels fresh and sparkling, in direct contrast to the somberness of the next number, Karen's intimate and yearning "Little Altar Boy".

On the vinyl version of the album, this song ends "Side One". It also emotionally divides the collection with its stark, desperate lyrics. Karen's touching plea for intercession and ultimate redemption for her lost life burned in my ears from first listen. When a vocalist whose personal life held inner turmoil and ended in tragedy, these lyrics take on a haunting, new significance. "Little Altar Boy" is the spiritual equivalent of the duo's earlier "Goodbye to Love". She quietly screams to be noticed and loved. 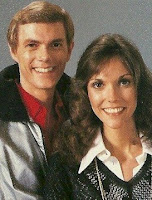 Thankfully, "Side Two" begins with the triumphant "Do You Hear What I Hear?" In contrast to his vocals elsewhere, Richard sounds absolutely confident and terrific. Yet, this is ultimately a command performance by Karen. As the music builds to its crescendo, Karen's singing matches the song, ending in a powerful presentation of the last word, "light". For a vocalist known for her intimate, warm, soft voice and nuanced phrasing, this last note reminds us she was in control of that gift. Here, she belts it out with the best.

If we've heard Karen, it means it is once again time for Richard. "My Favorite Things" seems an odd choice and is not one of my favorite selections.

"He Came Here For Me". It is a testament to Richard's knack for finding great material that this song was ever recorded. Again, Karen goes to the lower end of her range to good effect. To my ears, the overall result is not as strong as "Little Altar Boy", but I so appreciate the richness of the lyrics:

Jesus, Lamb of God, I pray to thee, hear me
As I praise thy birth bend down thy ear and hear my prayer
Over a stable a star shone so bright,
guiding three wise men who rode through the night
He was called baby Jesus, He came here for me,
Born to this world, then He died here for me."

From the sacred to the secular, Karen and Richard follow up the previous selection with their 1974 recording of "Santa Claus is Coming to Town". This slower dreamy version perfectly shows off their skills. Richard's terrific arrangement allows Karen to take center stage. In contrast to the original release, the saxophone solo has been entirely reimagined. For the record, I enjoy each saxophone solo for different reasons. On this take, it brings a smooth jazz feel to the song, very appropriate and contemporary for its inclusion a decade later. (Just a side note here: I loved watching Karen and Richard perform this on Perry Como's Christmas special. She looks great!)

What can I say about "What Are You Doing New Year's Eve?" I was smitten at first listening! The 1940's produced some of my most loved recordings, and I had long thought Karen and Richard should be doing these kinds of classics. The inclusion of "I Can Dream Can't I?" on the Carpenters' masterpiece album "Horizon" confirmed I was right. Certainly, there are stronger performances on this holiday collection, but this romantic piece is my personal favorite. It is the perfect match of singer, song, arrangement and production.

After three vocals in a row by Karen, Richard's selections from "The Nutcracker" are a great way to draw near to the album's end. Somehow, he makes this sound new, even though the music has been heard for decades. Just beautiful.

The album's closer, "I Heard the Bells on Christmas Day", was a song I did not remember and one that took me awhile to appreciate. "Lower register" and perfectly sung- check. Well arranged and produced- check. But what was it about the song that I just didn't like? Took years for me to figure it out. The song signifies the end of an era for me. Really, for all of us.

Television outtakes, aside, there would be no more Christmas music from the duo. Karen and Richard's holiday themed television specials would not see release. Richard's long discussed solo Christmas album would be started, delayed, and ultimately shelved. (In 2002, he would go on to give two songs to Japanese vocalist Seiko Matsuda: "Christmas Turned Blue" and "December Morn".)
In my opinion, the Carpenters and Christmas go together. Christmas music means Carpenters albums. Karen's is the voice of the season, and "Christmas Portrait" is always the first disc played in our home when I control the player. It will always be that way. The second disc is good too, but regardless of its many charms, it is a patchwork project.

Thankfully, even though "An Old Fashioned Christmas" would be their last holiday release, Richard had more Carpenters music ahead for their fans- and in some ways, for posthumous releases, the best was yet to come.
-----------------------------

2021 Note: This is part of a continuing series of posts on the albums of Karen and Richard Carpenter. There are also numerous stand alone posts highlights different aspects of their career, recordings, and life.
Below is the list of my initial reviews and then my "Revisited /Fresh Look" reviews a decade later.