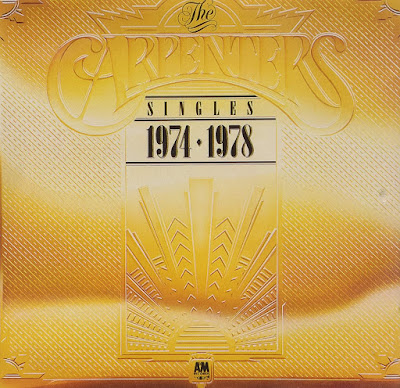 Karen and Richard Carpenter's track record on the Billboard album sales charts was becoming a bit spotty. After their stunning success from Close to You all the way through The Singles 1969-1973, their 1975 release Horizon was a letdown albeit an artistic triumph. Once that masterpiece peaked outside the Top Ten, the follow-ups fared no better. A Kind of Hush and Passage received a tepid response. Christmas Portrait became a perennial favorite, but for the studio pop albums, "The bloom was off the rose".

The fortunes of the duo were much better overseas, with Japan and the United Kingdom remaining lucrative markets. In Japan, compilation after compilation of old material hit the top of the countdown. In the United Kingdom, a very successful tour following the release of Hush resulted in the new Live at the Palladium collection and paved the way for the Carpenters second greatest hits disc.

While the original Singles album displayed the artists at their peak, The Singles 1974-1978 reflect the beginning of the end of their illustrious career. Contrasting the two albums reveals just how far they had fallen from the glory days of old. Whereas 1969-1973 was released worldwide, the second gathering of Carpenters hits collection was a U.K. only exclusive. That fact itself is telling for artists who were at one time among the top selling musical acts ever.

On the first greatest hits package, an elegant introduction to their first number one song gave way to We've Only Just Begun, a smash hit and instant trademark. On this newer disc, the listener must endure four different singles before encountering the first real hit among Phase Two: I Won't Last a Day Without You.

Just before that Paul Williams penned American hit, a recut version of Can't Smile Without You appears. Due to the incredibly popular version recorded by Barry Manilow, the suits at A&M or Richard Carpenter himself decided to give devoted fans a nice little treat. With a new lyrics, some new vocals, and new instrumentation, the song is quite different than the original.
Twelve recordings are present here. Two are album tracks, and the popular but "international release only"Jambalaya fills out a mostly unimpressive album. The album is not without its charms, and the most popular sellers are reserved for the latter half of the disc.

The album is not a bad collection- how can it be with beautiful songs like Only Yesterday and I Need to Be in Love?- but it exists mainly as a place marker while the duo tried to figure out their next career move among a rapidly changing musical environment.
-----
2021 Note: This is part of a continuing series of posts on the albums of Karen and Richard Carpenter. There are also numerous stand alone posts highlights different aspects of their career, recordings, and life.
Below is the list of my initial reviews and then my "Revisited /Fresh Look" reviews a decade later.


I'm actually a fan of this collection. This is where "I Believe You" should of found it's home, as Karen's vocals were still top notch. Plus the packaging was beautiful and sits proudly beside my 1969-1973 singles collection.

A later CD version could of expanded this to 15 tracks and included Goofus, Believe, and maybe a previously unreleased track from 1978, maybe as a "new" single to re-excite this release.(Like Honolulu City Lights!) -JA

Not a bad idea!