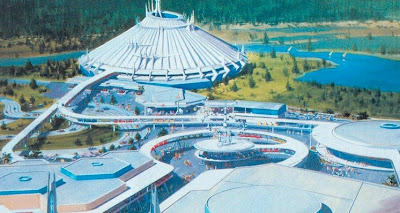 Space Mountain. The name alone evokes excitement for theme park fans all over the world. Whether it is the classic, iconic structure found in Florida, California, and Tokyo; a similar takeoff placed in a Tomorrowland that almost feels kid drawn in Hong Kong; or the elegant Jules Verne styled masterpiece in Paris, the sheer sight of the mountain makes millions of visitors run toward it with anticipation. For this generation, blasting off through the universe has become a right of passage for young Disney fans, but it wasn’t always this way.

Walt Disney had long passed away when Space Mountain debuted at Florida’s Magic Kingdom in 1975. The thrill ride was part of a slew of much needed additions for Tomorrowland. Like most all of the early classic attractions, however, its roots came from Walt himself many years before, and this ultimate thrill adventure was initially planned for his beloved original park in Anaheim. 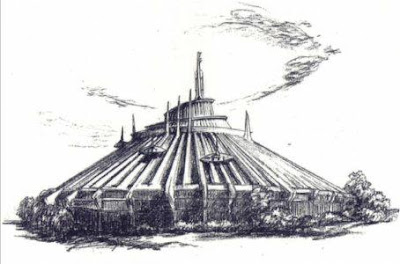 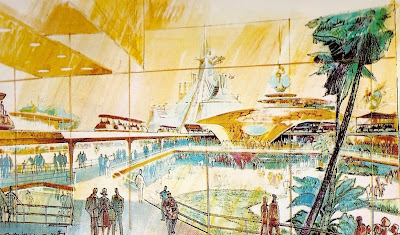 America’s obsession with space travel provided the perfect timing for an attraction such as this. The future fascinated Walt. He loved science, space exploration, and new technologies. In addition to being an under appreciated businessman as well as a dreamer, fortunately, Walt was also a doer, and he assembled a team that could dream and create with him.

As discussions continued with the team, concept art for Walt’s Space Port, as it was originally named began to emerge. Many different looks were considered before settling on the timeless exterior familiar with fans in the States, and Imagineers Herb Ryman and John Hench each came up with designs that would be somewhat merged for the final result. Plans for Disneyland’s new Tomorrowland of the sixties included the attraction, but other priorities took precedence, leaving Florida to open the attraction a couple of years before it finally hit California soil. 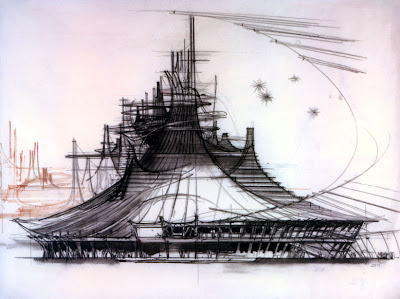 Once the design was settled upon, a detailed model was built, giving the Imagineers a chance to view how the attraction would fit into the Magic Kingdom. 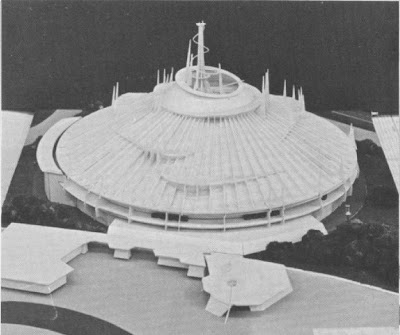 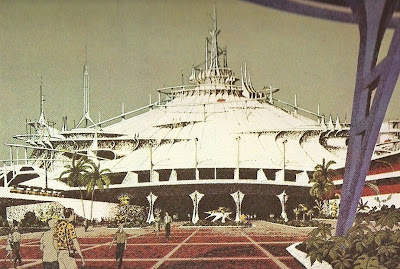 Upon its opening, Space Mountain became an instant fan favorite and theme park classic. With its thrills, the experience was a strong bid for the youth market who found much of the Magic Kingdom park too tame with its emphasis on slow moving attractions and cabaret shows like Tropical Serenade (Enchanted Tiki Room), Country Bear Jamboree, and The Mickey Mouse Revue. The trend setting Mountain transformed into a park staple, with pale imitations created all over the world in an attempt to capitalize on its success. Even if you are not a Disney fan, chances are you know the name, probably recognize its timeless form, and are well aware of the adventure within. Another Walt inspired masterpiece. 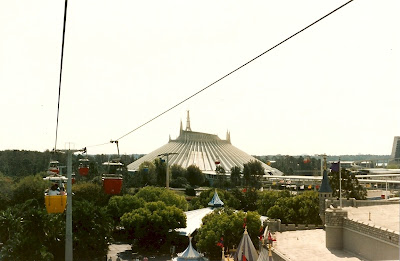 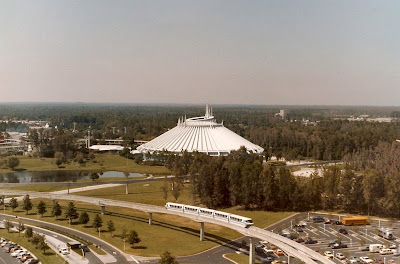 “The blessing of size” as Walt said with regards to his Florida project, enabled the Imagineers to create a dual tracked Space Mountain for the younger Magic Kingdom park. Disneyland’s smaller footprint demanded a similar but much smaller mountain back in Anaheim, bringing with this change a single track, different loading zone, and a much tighter flight course. Debates continue as to which mountain provides the better experience but both are beloved and appreciated for their differences. 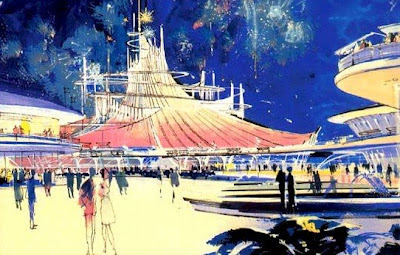 Living in Southern California during the time of its construction gave me the opportunity to watch the attraction grow over time. Prior to the opening of California Adventure, it was possible to enter the parking lot area by Space Mountain with your car, and I took advantage of the opportunity to drive by often, inspecting the progress. When the attraction finally opened in 1977, I was among the first in line to take flight. And what a line it was! At one point, the queue snaked down Main Street and the hours passed as flights were on then off during its test period. The experience was quite the rush as at opening with the atmosphere darker, the rockets faster, and the journey unfamiliar. Even after thirty years and multiple changes in exterior color and interior enhancements, the thrill has not grown stale. 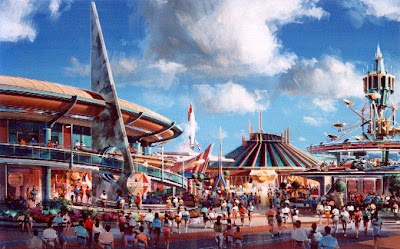 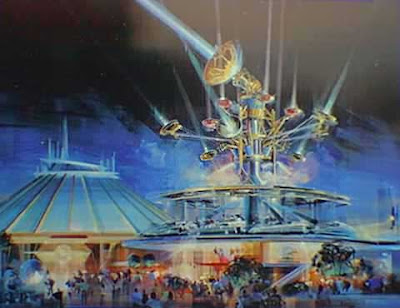 The ability to hand pick from two differently designed Disney kingdoms resulted in giving the Japanese guests a very interesting version of the first overseas Disneyland. When the park opened in 1983, guests found this one to have an entirely different feel, a blending of both American parks and few unique elements at opening. Surprisingly, even with access to the larger Florida version, the Japanese chose the California’s attraction as the one to be duplicated. 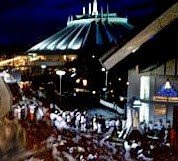 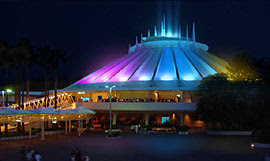 European fans that trekked to the Sunshine or Golden States for a Disney fix were surprised when the lovely and uniquely designed Paris park added Space Mountain in 1995. The iconic white mountain was replaced by a gorgeously themed and wonderfully executed Jules Verne inspired adventure.

Originally planned as Discovery Mountain, the attraction inside was as different from its cousins as was its exterior: the open air loading station sends its rockets into a smoke-spewing cannon as guests are launched into the mountain. The track layout included multiple inversions- the first for a Disney park- and the inclusion of a majestic musical score to accompany the journey. This new twist on an old favorite brought in the crowds. Some would debate it even saved the resort. 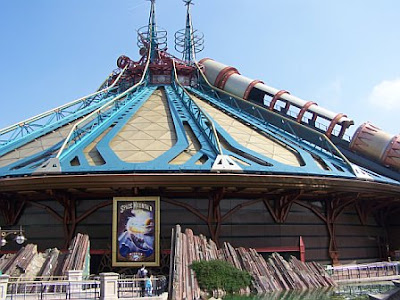 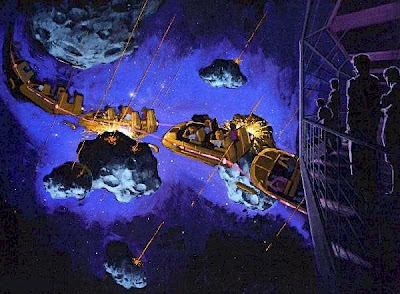 Although the exterior building concepts remained largely the same, the Imagineers presented several different ideas for what was to be built inside the mountain. In addition to Space Mountain, ideas ranged from a Nautilus adventure including a restaurant inside the submarine to a unique use of the technology that makes The Twilight Zone Tower of Terror so popular for an additional attraction themed to a different Jules Verne novel. (For more information and concept art, track down the wonderful book Disneyland Paris, From Sketch to Reality by Alain Littaye and Didier Ghez.) 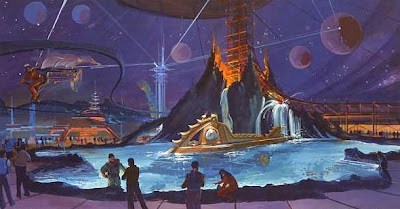 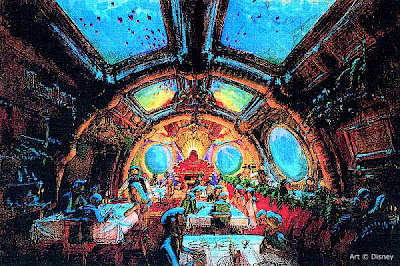 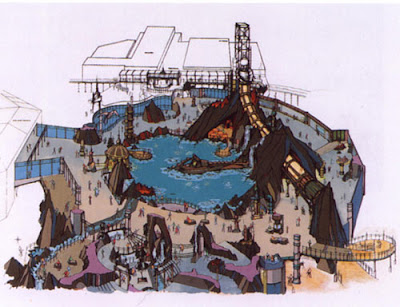 Upon our first visit to Paris in 1998, Space Mountain: De la Terre à la Lune, and Phantom Manor were at the top of my must-do list. The ride was as wonderful and thrilling as I had imagined it would be! I couldn’t wait to ride it again and promptly returned to the queue for another trip. In its own unique way, viewing the mountain and watching the Columbiad cannon send explorers on their journey was as compelling as seeing the beautiful Eiffel Tower. I couldn’t take my eyes off the attraction. Beautiful during the day and absolutely spectacular at night with its magnificent lighting, this Space Mountain is the ultimate execution of the concept. 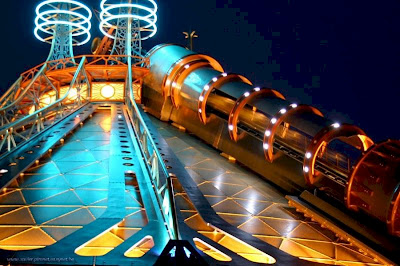 The opening of the first Disneyland in China, Hong Kong Disneyland (2005), provided an opportunity for building yet another version of the Magic Kingdom classic. Due to budget adjustments and misguided opinions of what should constititute the park, it remains short on attractions. However, the famous Space Mountain was a must for opening day. The setting of the Chinese Tomorrowland is more akin to a Saturday morning cartoon than previous versions, but the mountain itself is a near duplicate of California's. In a new take on the mountain's use and design, it also houses an attraction based on the main character from Lilo and Stitch. 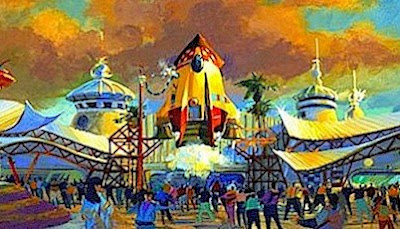 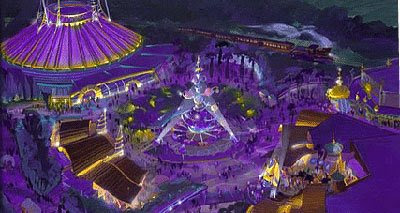 Where will the next other worldy mountain show up? Some folks are sure it will be in Shanghai Disneyland, but only the Disney executives truly know. For all the questions we may have, one thing is certain. Space Mountain in all its incarnations, will continue to thrill and fascinate millions of guests looking for a chance to explore the universe and then return safely home!

(All concept art and Tokyo Disneyland photos copyright The Walt Disney Company; all other photos by Mark Taft)
Posted by Mark at Tuesday, September 22, 2009

Excellent article. Sad that Space Mountain will be closed on my next WDW trip but I am interested to see what they have done to it at Disneyland when I return. The Anaheim version is simply incredible.