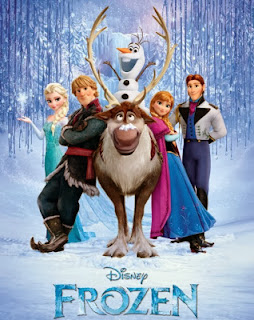 Unexpectedly good. Very, very good, in fact. Disney's Frozen holds its own with the classics. The long in coming adaptation of Hans Christian Anderson's relatively unknown "The Snow Queen" warms hearts with interesting characters, breathtaking atmosphere, and a storyline that Disney has never worked before.

The princess siblings Anna and Elsa have a mysterious, and at times, unfortunate bond which causes much difficulties between them. Forming the heart of the film, the characters are richer than you'd expect from Disney. The same can be said for the two suitors. Commoner Kristoff and royal Hans compete for Anna's hand. Which one will she choose? 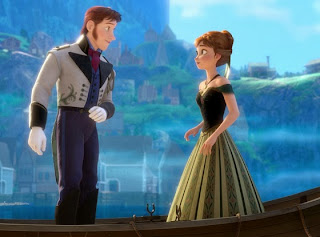 The voice actors Kristin Bell (Anna), Idina Menzel (Elsa), and Josh Gad as frosty sidekick Olaf, do a particularly good job with the task at hand.  The music and songs are pretty good too- much more complex at second thought than just ordinary and serviceable. In my mind, the standout number is the comedic "In Summer" by the lovable and charming snowman. 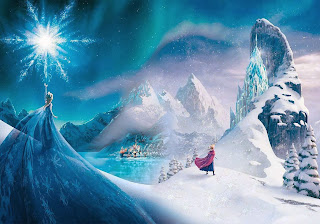 What is a great Disney film without excellence in animation? The animation here almost steals the show. The kingdom of Arendelle is so beautifully created and atmospheric that there should be a travel advisory for Scandinavia at the end of the film. The special effects are stunning- snowy storms, transitions to glistening ice,  and the rebirth of summer to the kingdom are fantastic- among the best Disney animators have ever accomplished. You must see this in the big screen. Do not wait until its inevitable home DVD release. Do buy it when it arrives, but in the meantime, you can click on the above image to see what I mean.

There's not one single standout number a la "Under the Sea" or slice of animation that matches "I See the Light" from Tangled, but instead there is a compelling cohesiveness as each piece part works together to create an absolutely winning combination. Make no mistake- superlatives and promotional material aside, Frozen is a treat for the family.

I would like to add that Idina Menzel's "Let It Go" is most certainly a huge standout in the movie, and my favorite Disney princess ballad.