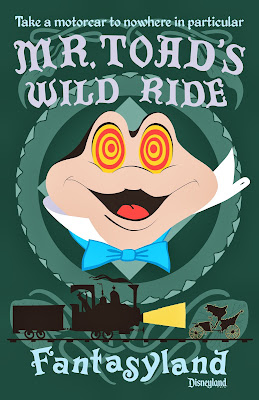 You might wonder why I have chosen to begin this continuation of my Disneyland Attraction Posters series with a newer specimen versus one of the original classics like the poster for Peter Pan Flight. Well, it seems the eternal Mr. Toad and his Wild Ride may once again be making an appearance in a new Disney movie. My decision also goes to underscore the evolution of the concept and execution of Fantasyland, most recently at Walt Disney World's Magic Kingdom but also at Shanghai Disneyland. And what a story it is. 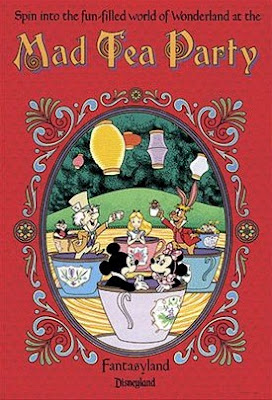 Click on all these posters to get the largest size.

To make a very long story much shorter and stick to the point of the Attraction Posters series, Walt Disney and his Imagineers ran out of the cash needed to build Fantasyland in the way Walt first envisioned it. In place of the elaborate European village Walt desired, one that eventually came to fruition under Tony Baxter's leadership in 1983, a smaller tournament tent setting was created. Using colorful banners covering flat sided buildings, Fantasyland was still something park guests could not find elsewhere in 1955. 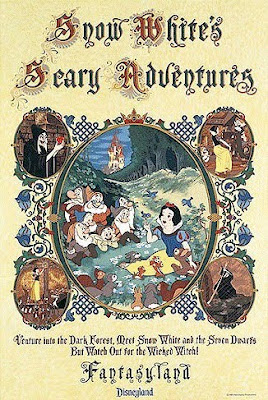 One of the original Fantasyland dark rides, Snow White's Adventures was probably the scariest of the bunch, (although Mr. Toad's Wild Ride through Hell probably gave it a run for its money for the ending alone). As far as I can tell, the original attraction never had a poster of its own. There one above is just a new poster circa 1983, when the attraction name now included the word "Scary" to give parents and small children reason to think twice before boarding. 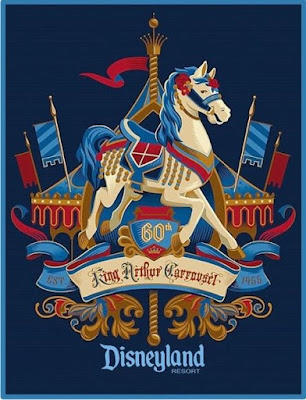 
Peter Pan's Flight. Just the name conjures up magical journeys over Neverland- and an extremely long wait for any guest who chooses to queue half an hour after the park opens. The poster below effectively captures the viewer, driving attendance to the ride, and making it one of the most sought after experiences to be found bar none. The simple tournament tent facade didn't do much to set the flavor for the delights inside, but no matter. The poster stands as one of the best pieces of art to be found in this genre. (If you want to read a bit more on the history and creation of this particular attraction, my "Disney Dark Ride Series" begins with Peter Pan's Flight and can be found here.)  Walt Disney World Magic Kingdom fans up in arms about the closure of Snow White's Scary Adventures or Mr. Toad's Wild Ride would have a heyday should Pan ever close, and the media attention would be enormous. It's as much as classic as Pirates of the Caribbean, 20K Leagues Under the Sea, or Journey into Imagination. 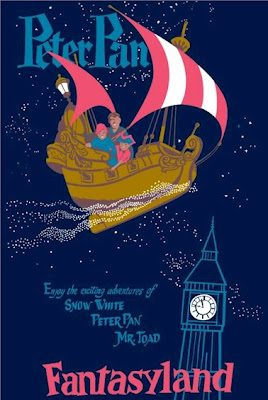 We'll come back to a few other dark ride posters, but now it's time for a promotional poster for the Matterhorn Bobsleds. 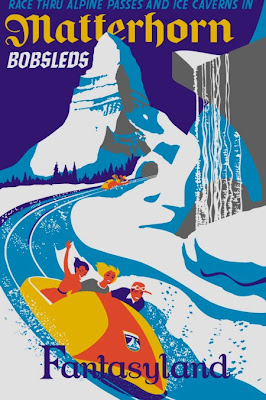 Where is this attraction located? At different times throughout the history of Disneyland, it was conceptually moved back and forth between Fantasyland and Tomorrowland. No matter. Racing down the icy slopes of the peak is as much a Disneyland tradition as any other. This alpine inspired poster captures all the thrills, providing everything but snowflakes and chills for the full effect. I love this poster! Everytime I look at it, I am tempted to jump aboard the fastest plane to Anaheim or put on my CD collection celebrating 50 Years of the park (A Musical History of Disneyland) just to hear the yodelers . In fact, this poster is one of the few that I own. (The other is Adventure Isle from Disneyland Paris.) 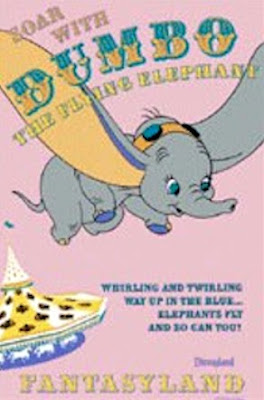 A charming little spinner with the kid-friendliest face long before Winnie the Pooh, Dumbo Flying Elephants continues to be a source of frustration for parents as the queue remains as intense as those for a flight with Peter Pan. Who can resist this rite of passage for their pre-school children? We couldn't. In fact, my last trip on the little elephant was probably 25 years ago. Yet, what a delightful piece of eye candy in the old school Disney vein. I'd hate to see the attraction go. And I'm glad to see Florida is getting its double spinner to move the crowds to the farthest corner of the Magic Kingdom. 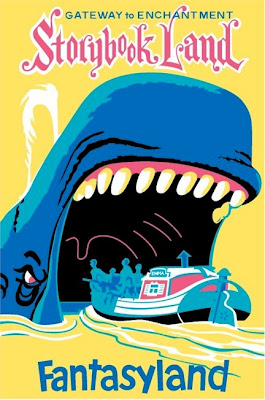 "Canal Boast of the World", yes, when the park first opened, that was the name of the now beloved Fantasyland classic, Storybookland Canal Boats. Thankfully, Disney designers waited until the new name arrived (and the foliage grew in!), before creating a poster for the attraction. But where is an attraction poster for the equally terrific Casey Jr. Circus Train? Maybe it will come in another decade as more changes sweep through the land. As I said at the beginning, Fantasyland is the land with more evolution in execution than any other one in the park. You'd think that award would go to the once futuristic Tomorrowland, but Disney has clearly given up on the concept...for now. 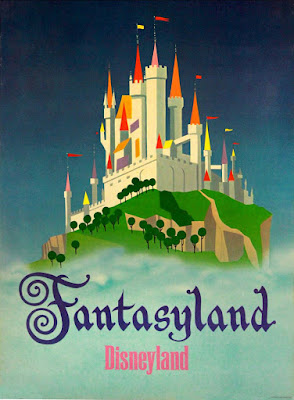 Ever wonder why there's no poster for Disneyland's iconic castle? So did I. Seems there actually was one. First found in 1966, this little gem was sold at Disneyland's Emporium on Main Street U.S.A. for exactly one summer before it disappeared forever. I love how the creviced hillside was to be seen here- decades before it would appear in person at Disneyland Paris. And look at the colors!

The candy colors of these old attraction posters were quite in vogue back when they were first designed, in direct contrast to the newer "Old Europe" look of the dark ride poster for Snow White that debuted with the construction of the new Fantasyland. I much prefer the old styling. The simple graphics and colors create a mood of escapism that doesn't seem to exist in the newer more in-your-face sensibilities. The Mr. Toad's Wild Ride poster being the prime example of a design mismatch for a classic dark ride. 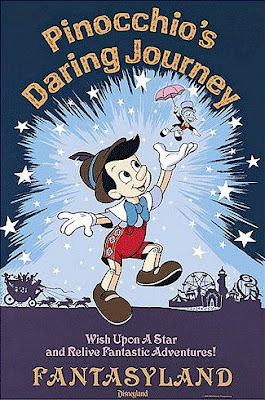 And speaking again of dark rides, with the debut of the new Fantasyland in 1983 came a new dark ride- Pinocchio's Daring Journey. Although it had its debut in Tokyo, this new dark ride brought some interesting changes to the land of fantasy. Gone was the Welch's Grape Juice Bar and the wonderfully empty and cool respite in the summer, the Fantasyland Theater. (I know I have a poster for the theater attraction somewhere.) Also gone was Skull Rock and its nearby Chicken of the Sea pirate ship restaurant. Effectively, these changes updated the land and set its course for the future. The crowd flow was easier due to a move of all the spinner attractions, but it was the end of the Walt Disney era in a way that almost felt physical when you walked into the castle courtyard.  Fair trade off, I'd say, for the beautifully rich environment and magical far away feel of the place. 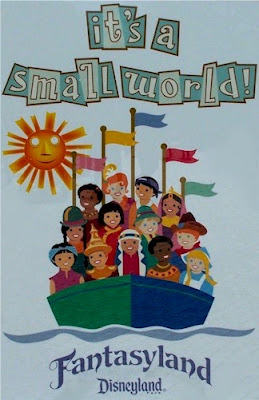 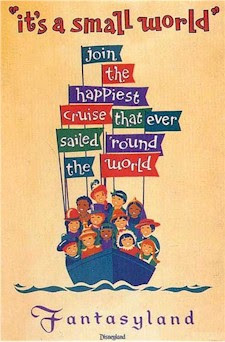 "The Happiest Cruise that ever Sailed 'Round the World" needs no introduction. It is probably the most beloved, tolerated, or ridiculed attraction in Disney park history. Love it or hate it, It's a Small World was an instant classic, and I count four different versions of the attraction poster used to promote it. Just like the attraction it promotes, there have been sutler and no so subtle changes. The last one shows the original, with the ride's sponsor of Bank of America shown above the Fantasyland designation. The second, once the sponsorship ended, and the top the newest of all. The bottom one may be the "cleanest" copy of all. 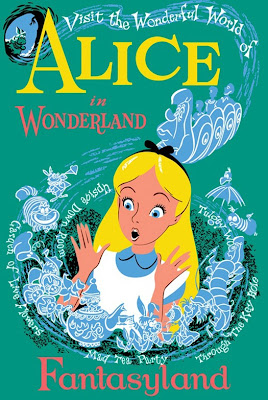 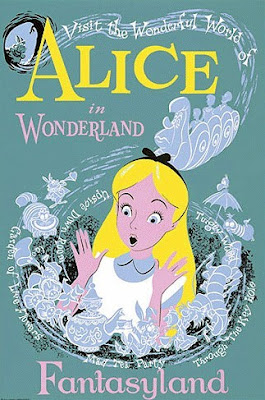 I've saved Alice in Wonderland for last. In many ways, it is the most original of all the dark rides in the park. The combination of indoor and outdoor sections of track and its ride length made it a crowd pleaser. Plus it provided great views of Fantasyland and the right next door Matterhorn Bobsleds! The psychedelic theme and characters make for a delightful, magical trip.  I never could understand why this attraction was not duplicated elsewhere, but I am glad it remains a Disneyland exclusive. Certainly in the beautifully themed Alice section of Disneyland Paris I would have expected a dark ride for the namesake star, but it was not to be.

Whichever color scheme is the right one for the original attraction poster, I do not know. Either one captures the imagination, and the attraction itself is a much better experience than the movie from which it was taken!

Like Fantasyland itself and Disneyland at large, Wonderland is the perfect ending to this segment of the Disneyland Attraction Poster Series.  The whimsical environment of Alice's story is much like the land in which it is contained: charming and constantly changing. I am positive there will be additional attraction posters designed as new rides are built. Walt Disney World's New Fantasyland Forest and Shanghai Disneyland's entirely new concept for the area will provide inspiration for new designs and styles of these posters. But that is an article for another time.

I guess that leaves the posters of Tomorrowland for the conclusion of the Disneyland poster series. Keep an eye out for it!

Love the Disneyland attraction posters. They are, without a doubt, the catalyst that pushed me into a career in graphic design. My personal favorite is the Submarine Voyage, but it's really hard to knock any of the classics. The recent revival of the classic style in regard to the design of attraction posters is a wonderful breath of fresh air. For a while the designs were simply "meh".

I agree- and the Toad design is one of the "best" examples of the drop in quality. On the other hand, I am loving the new DCA posters!