Epcot's Japan Showcase That Never Was 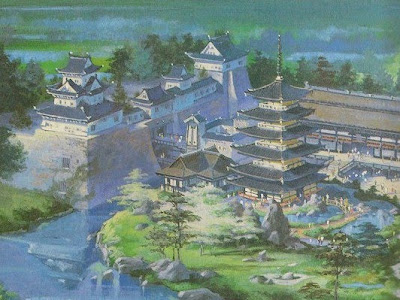 The temporarily closed Tokyo Disney Resort and its two theme parks, Tokyo Disneyland and Tokyo Disney Sea, are world class. Some of Walt Disney Imagineering's finest work, actually. As we wait for more news, let's take a look at Epcot's stylized take on their beautiful country. (Click on these images for a much larger picture!)
-------
Prior to the realization that EPCOT Center would be blowing past the funding to build it, the Imagineers at the Walt Disney Company had pretty grandiose plans for each of the World Showcase pavilions. Some of these plans came to fruition, but in the case of the Japan representation, earlier plans gave way to a scaled back version of what was intended. On opening day, the World Showcase section of the park was comprised of three films, one boat ride (the elegant El Rio del Tiempo in Mexico- which was also a victim of cost cutting), and one single Audio-Animatronics show, The American Adventure. In park entertainment from each participating country was always planned from the beginning, but dining, shopping, and cultural experiences would form the overwhelming reason to visit this side of the lagoon. The attraction roster here was extremely light. 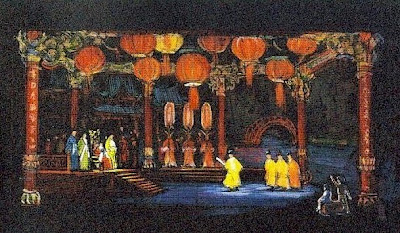 In this piece of concept art from the Company annual report in 1975, you can see that the Japan showcase was originally planned to have a real attraction: Meet the World, a history focused Audio-Animatronic presentation that premiered at Tokyo Disneyland. This was to be theater in the round, using the same revolving stage design originally engineered for Carousel of Progress. As with other politically or historically based shows, Meet the World was custom tailored by Disney for its specific audience, here presenting a light glossing over of Japan's role in World War II. 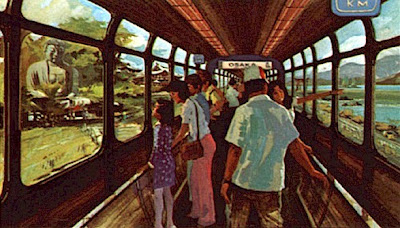 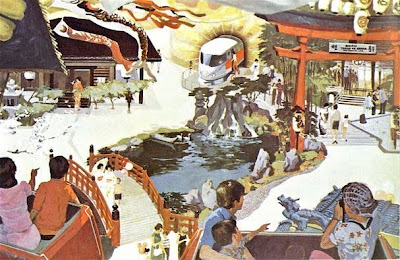 The two images above show an altogether different attraction planned to highlight the beauty of Japan. In this unnamed attraction, a bullet train ride would take guests from the city to the countryside, showcasing the nation from a new perspective. Enlarging the second graphic, you can see that guests would board vehicles that look similar to the ones used for the Peoplemover. The first piece of art shows a version where the guests would stand. Guessing this would be a variation on a motion simulator. Either way, a combination of film and carefully placed props would be used to set the stage for the journey. Having seen a good portion of Japan for myself, I would have much enjoyed this particular ride!

Although neither adventure was ever built, these were not the only concepts thrown about. A long rumored Mt. Fuji based thrill ride was also on the books at one time - and discarded along with all the others. Urban legend says Kodak, one of Epcot's major sponsor's, objected to naming an attraction that would use their main competitor's name (Fuji Film), so the plan was scrapped. The Imagineers considered the same Matterhorn Mountain inspired attraction from Disneyland for a proposed Swiss pavilion. Had some of the original plans for the Millenium celebration come together, there even would have been a smaller version of Tokyo's Ginza district built toward the back of the showcase!

Until the suits decide to reinvest in this esquisitely stunning part of Epcot, World Showcase will remain without a brand new attraction, relying instead on the same type of plan they moved to from its opening. Recent additions of restaurants to both the Italy and Mexico pavilions seem to indicate this disappointing stagnation will continue. Before the next renaissance hits, guests to this side of the park will have to appreciate it for what it is. In Japan, this means enjoying beautiful architecture, sublime food and drink, excellent shopping, and hidden, lovely gardens.

Come back tomorrow to explore an interesting way in which you can help the people of Japan as they rebuild. And for those of you who pray, keep it up!

It was actually built into Communicore (on the second level) and planned to circle WS. One idea even had the Peoplemover ringing the lagoon instead of being inside the WS Pavilions.

Thanks, George. I always thought it would have been cool if World Showcase has a Paris Metro type set-up, where guests go emerge from underground stations into somof the countries. Imagine going up into the UK pavilion from a station that looked like it belonged in Picadilly Circus, a Ginza one from Tokyo, or the Paris Metro.

I seem to recall seeing a Westcot plan somewhere online that had just such an underground conveyance.

Wayne, if you ever run across that, I'd love to see it!