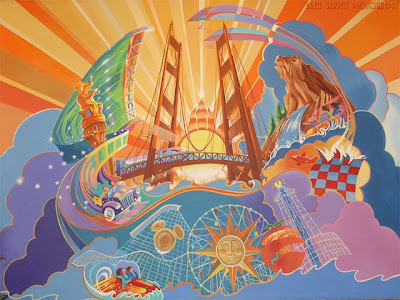 Let's continue celebrating the Ten Year Anniversary of California Adventure! Now with even more concept art to be seen, we continue on with our look at the design, execution, public rejection and eventual transformation of Disney's California Adventure, let's examine some of the post-opening plans the company launched. The Disney Imagineers attempted to make the park a success in the eyes of the public but with very mixed results.

Once the Grand Opening of Disney's California Adventure was behind them, the executives of The Walt Disney Company waited for the crowds to come- and waited and waited and waited. And then they acted in desperation, cutting much of what really worked in the park. 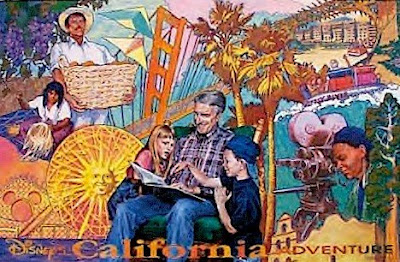 Early renderings, models and posters of the park communicated poorly- or maybe too accurately, prominently featuring the carnival side of California Adventure and the film making aspects, things that could be found at other southland amusement parks like the ones they were trying to emulate, Six Flags, Universal Studios, and the nearby Knott's Berry Farm. Disney used to be the innovator, now it was playing follow the others. Not a smart business strategy in which to convince folks that Disneyland was a resort! 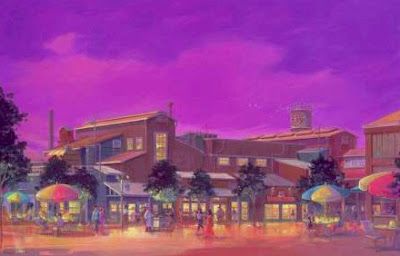 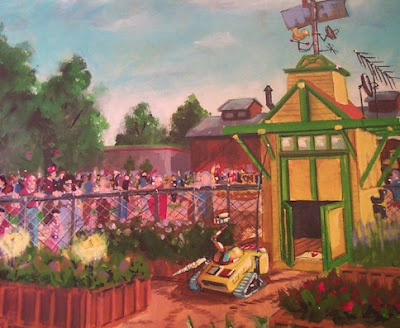 Bad weather, 911, the economy, misunderstanding of the park- all these reasons were given as to why the crowds didn't materialize. Every reason except the real one: They did not build a park up to Disney standards, and the public was not fooled by their half-hearted approach.

For those in the Company that couldn't- or dare wouldn't- admit this, the public face they had to play was a no win situation. On one side, were these just very out of touch Disney executives wondering what happened? Why didn't the paying public appreciate groundbreaking attractions like a work place displays, small areas of crops, and a series of tractors? What was wrong with carnival attractions that could be found at state fairs? Apologists said it worked for Dumbo at Disneyland, so why not at California Adventure? Surely they like movies? Yet, no one was filling the seats. Instead of ignorance, they could play the other side, blaming everyone and everything else but themselves.

Eventually, behind the very private boardroom doors, reality set in: Disney had tried to sell the new park as the pinnacle of Imagineering efforts, but the public saw through all the hype and advertising, deeming the park mediocre long before the CEO would admit it. 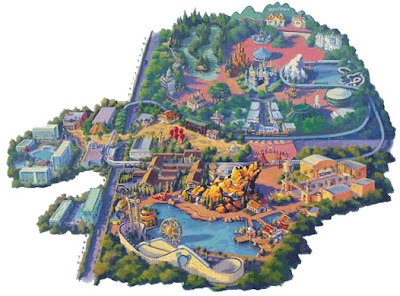 First thought to be a placeholder for those who couldn't get into the new park, the original Magic Kingdom, Disneyland, was doing just fine, thank you. Instead, its newer sister park was clearly the less favored ugly duckling. The numbers were dismal. Cast members tried to drum up enthusiasm but couldn't fake it. Park managers were stunned with disbelief, but it was the corporate sponsors that were less than delighted. With each passing week of poor attendance, some made plans to take their losses and leave the park. 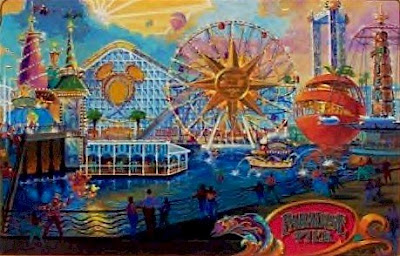 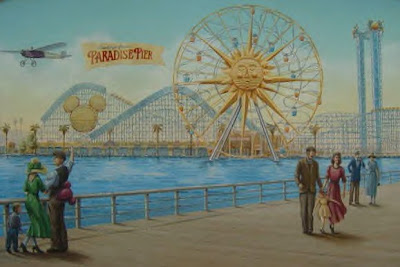 From the guest standpoint, surveys seemed to indicate that Disney had forgotten much about what made a beloved park. There were too few attractions for families, too many film-based theater shows, clones of secondary draws from Walt Disney World, and overall very little shine with a silly theme. A California based park in California just wasn't taking them anywhere magical. 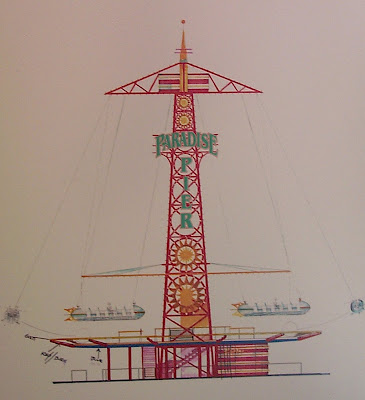 The most oft and rightly criticized area was Paradise Pier, a modern version of an old seaside amusement park. It was paradise in name only. This area was executed as a cheap version of a Six Flags park- full of iron rides with little originality or dressing. Few trees, little shade, less charm.

The park entrance, dubbed the Sunshine Plaza, was said to create a "hip and edgy" vibe for the park, but far more excitement was to be found at the very places it successfully emulated: Southern California shopping malls. Certainly more than a few guests entered the park, viewed their surroundings and thought, "I should have gone to Disneyland instead". The poor cast members at Guest Services knew this to be true from the get go, offering the seemingly endless line complaining guests to enter Disneyland for the rest of their day. 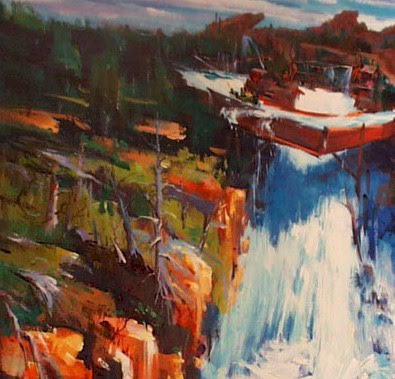 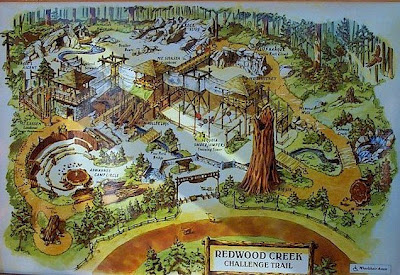 The only true new and winning area seemed to be the Golden State, an area that actually celebrated the California theme, and it was successful without any Disney characters in sight. Perhaps its charm came from duplicating the design sensibilities associated with Epcot's World Showcase. Recreations of the wineries, the desert airfields, and the wharfs and mountains of Northern California created a fairly pleasing amount of eye candy.

Even that district was not without it problems, as fans realized the park's icon was a beautifully designed mountain that held a raft ride found at dozens of other parks. Adjacent was an imaginative children's play area themed to California's mountain landscapes. In the view of some, the raft ride, what should have been an incredible attraction, was just passable. But it was a major attraction in a park with little innovation- much like most of the park. There was one bright spot- Soarin' Over California, and that soon made its way to Epcot, stripping this struggling park of its one promotable jewel. 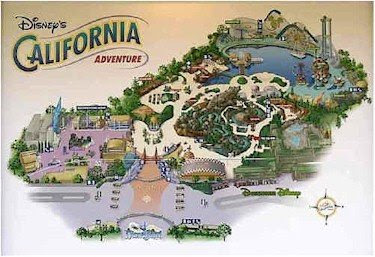 Something had to happen fast as the park was quickly becoming the laughingstock of the theme park and entertainment industry. When it became impossible to overcome public opinion, the next best plan of mice and men was to add to the park and add to it quickly. So now, here is a compilation of concept art for the next stage of this poorly executed second theme park at the Disneyland Resort. 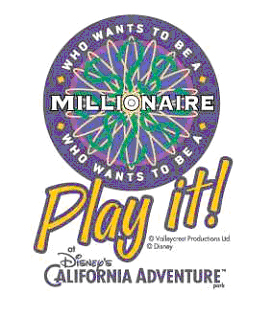 A quick addition was made to the Hollywood Pictures Backlot area: Who Wants to Be a Millionaire: Play It! This guest experience was based on the over exposed television show. It was a fun attraction, but really did nothing to bring in the crowds. Once the television show lost its audience, so did the attraction, closing quickly thereafter. 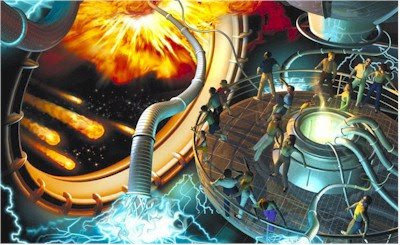 This rush to bring in guests had another down side. Once proposed attractions for the Backlot area were now abandoned. This included the unique and immensely fun Armageddon special effects show built at Walt Disney Studios Paris. One of the best attractions at that cheaply built park, it really fit in the Studios based section of California Adventure, but never made the cut. 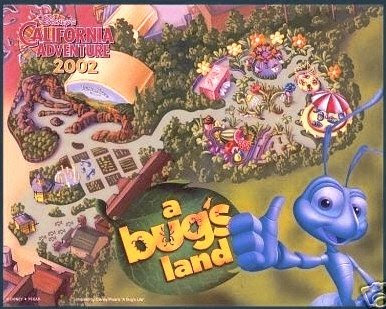 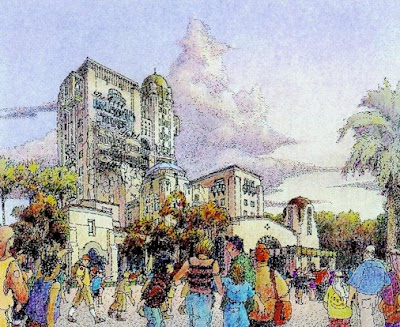 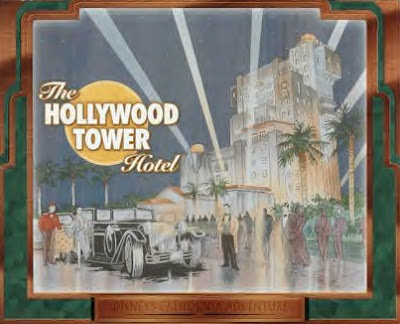 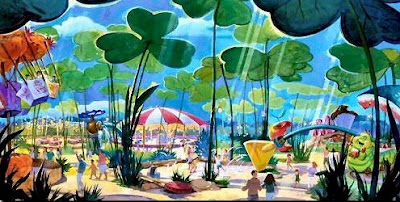 In an effort to bring more Disney to the park, Pixar characters were added and the unique California flavors were decreased. The wonderful Eureka parade gave way to ...nothing. On the park's one year anniversary, Disney announced that Flik's Fun Fair, a kid oriented play area, and a reworked (but far less impressive) Twilight Zone Tower of Terror would soon be added.

The Tower attraction was an outright smash in Florida at Disney's Hollywood Studios. Originally set to go into California Adventure at about the five year mark- and with a design initially planned for Paris, Tower was rushed into production as the suits in the Mouse House got very desperate for a crowd pleasing draw. 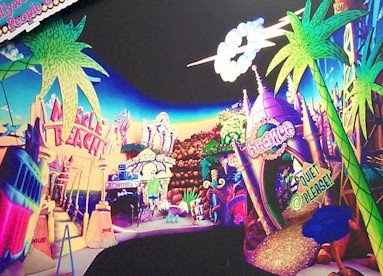 One of the oddest choices for an attraction in Disney theme park history was the ill-fated Superstar Limo. This wild journey through Hollywood streets was supposedly reworked from the ground up after the story surrounding Princess Diana's death. The revamped ride was so unpopular that it was quickly shuttered in 2002. Speculation on a replacement ranged from a reworking of the original theme to a classic Disney character filled excursion to appeal to children or even something featuring the Muppets, another dying franchise the company desired to resurrect. 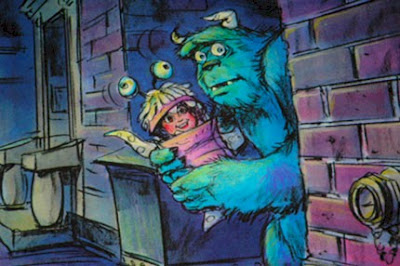 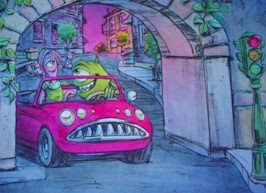 True to expectations, characters did end up inhabiting the stomping ground of Superstar Limo, however, and they were Pixar characters from the very popular Monsters Inc. film. Making its debut in 2006, this attraction made great use of its previous work on a fairly reasonable budget. Certainly, the attraction was as good as any smaller dark ride in Disneyland, but all these changes were not enough.

Even with "Placemaking", the newly coined phrase means redoing an area that was poorly themed to start with, the improved Backlot was much prettier to view but still contained an enormous amount of exposed steel and not enough real Disney magic. The "Millionaire" building was still empty, and the Hollywood and Dine eatery remained closed due to lack of crowds, only adding to the misery.

The success of Monsters Inc.: Mike and Sully to the Rescue became a source of on line fan debate. Some loved the attraction and applauded the Imagineers for their great work on a slightly larger than shoestring budget. Others claimed the ride deserved to be totally demolished and the space used for something else. (This writer happens to deem it a success and one of his favorite "C"/"D" ticket attractions on the Anaheim property.)

Most importantly, this choice foreshadowed a new change in strategy- California as a theme seemed to be on its way out, characters in California, and Pixar characters in particular, were on its way in. This trend really began with the earlier inclusion of A Bug's Land in 2002, but wouldn't see its full fruition until the total revamp of the park years later. 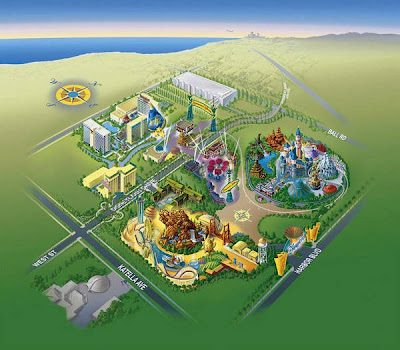 Once Disneyland's 50th anniversary was complete, the focus would reshift to its smaller, less charming sibling. It seemed the Disney executives finally understood they couldn't fool the consumer with a second rate park. Neither could they successfully rehabilitate it with another children's playground, extreme sporting events, or another cloned attraction from Florida.

With a new Chief Executive in Robert Iger came a big announcement and much money accompanied with it. Did he really get it? Did the new team understand the execution of the park lacked the details and care that made the older Disneyland a household name? Even more importantly, could the park even be salvaged at all or would it be a case of throwing good money after bad?

Would they follow through with the elaborate plans, concepts and models presented in the winery's Blue Sky Cellar? Time was not on their side as attendance continued to fall short.

Stay tuned for even more art tomorrow as we learn the Company decides they have to do something drastic to save the park...

(All concept art copyright The Walt Disney Company. Special thanks to Brett Garrett from the great Visions Fantastic for his photo of the first piece.)
Posted by Mark at Friday, February 11, 2011