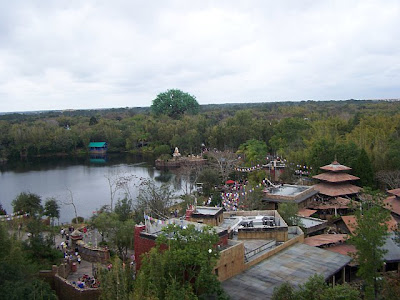 With the addition of Disney's Animal Kingdom to the Walt Disney World slate of diversions, Central Florida was about to be changed once more. Whereas the Disney-MGM Studios took on Universal, this time the Mouse was in a headlock with Tampa's Busch Gardens. Things were bound to get nasty.

The creation of a new Disney theme park means much anticipation from park fans, big advertising budgets, and many dreams of hefty bonuses and rich additions to the Company's bottom line. This time, however, those advertising budgets didn't deliver what was promised. Most visitors, fans, and the Walt Disney Company were not pleased by the end result.

However, it was not the consistent serving of multicultural perspectives and one world spirituality that dissuaded visitors from entering the Animal Kingdom gates. Guests were quick to notice the cleverly disguised shortcomings and limited attractions. This park was high on serious minded topics and execution without enough pure fun to even things out. The balance was achieved at EPCOT Center with clever and light hearted attractions like Journey Into Imagination, but here, its treatment of the human/animal relationship was too heavy handed. Bluntly, guests expected more for their money than what Disney had delivered and quickly left Animal Kingdom early in the day. 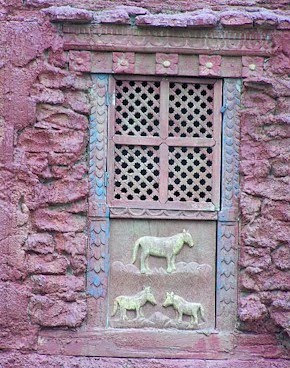 The Company had a public relations problem on its hands. As word of mouth decreased interest in the park, Disney responded equally fast that this was a place to be savored, not a rushed experience. Both camps were right to some degree, yet since Disney understood that guests vote with their wallets, plans were immediately made to add attractions and crowd pleasers to the park.

Additions take time, however. The persistent “half-day park” assessment, the early closing time, a lack of Disney quality, Audio-Animatronic attractions, and the misconception that Animal Kingdom was nothing more than a zoo, combined to keep attendance levels lower than the executives in Burbank desired. In fact, by some reports, attendance figures dropped for two to four consecutive years after the park opened. Although short on cash for expansion, new plans were still developed, each with varying degrees of success in acceptance and execution.

The first move from the Company was a poor choice, signaling desperation and lack of funds. Chester and Hester’s Dinorama was added to the prehistoric section of the park, providing additional fun for children but diluting the theme by adding a cheap carnival atmosphere to this elegant setting. A Dumbo-like spinner and a roadside wild mouse coaster took residence aside a land of plywood cutouts, strings of lights and cracked blacktop. Crying foul, park affectionados were disgusted by the blemishing effect on Imagineer Joe Rohde's beautiful gem. More changes came, dumbing down the park. 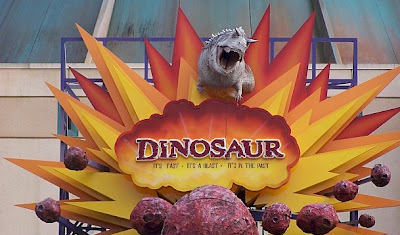 Countdown to Extinction became the generic Dinosaur, tying itself in name to the newly released Disney film. This was a poor choice, as the film was not the blockbuster hit the company wanted. Now a fairly good attraction was stuck with a forgettable identity. Other smaller name changes made things easier to understand for guests. Character appearances were thrown in around the park. Popular shows were given new indoor theaters to answer the complaint that there was little air conditioning to combat the Florida heat. 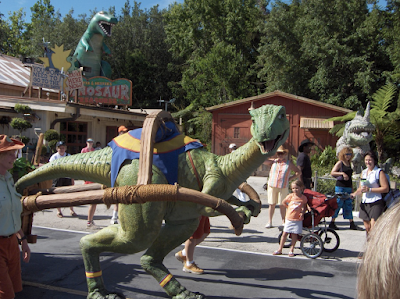 A year before Expedition Everest opened,
Lucky the Dinosaur made his appearance.
How hard would it have been to keep him in Dinoland U.S.A.?
Photo from Bioreconstruct.

In spite of these changes, numbers remained flat at best. Money was still hard to come by, but the company had to protect its investment and guarantee its long term success. Until things could turn around, Disney’s advertising team finally took on major task of damage control. They went after some of the misconceptions - or accurate perceptions? - directly, promoting that Animal Kingdom was “Nahtazu”, stressing the park was far much more than your neighborhood collection of wildlife.

When a large sum of money for real growth became available, advertising changed its plans again. New brochures for the park pushed the phrase, “Adventure Awaits” when Imagineering finally opened an attraction that single-handedly changed the fortunes of the park. 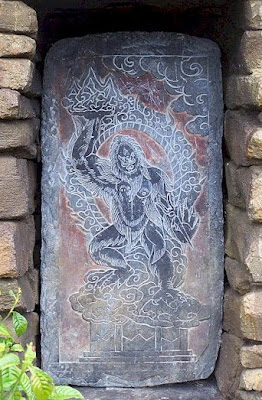 Expedition Everest: Legend of the Forbidden Mountain was just the high profile attraction the park needed. Beautifully in-theme and stunningly executed, this high speed roller coaster appealed to teens and families alike. The climax of the mountain journey was an encounter with the infamous and quite gigantic Yeti- the mountain monster from Nepal! Adrenaline rushing, guests returned right to the queue line immediately after riding. This was one instance where the superb concept art was surpassed by the majestic reality formed from concrete, steel and paint. The park had its first megahit- and the crowds began to appear.

The success of Everest catapulted Animal Kingdom above the Studios in Florida park attendance, but it also created the need for more shows, attractions and eateries to handle the folks now determined to make the park part of their vacation. The park still closer earlier than the other three on the property. There was no nighttime show. Smaller, younger children who could not ride Everest due to height restrictions still needed more to do. Fortunately, a small orange fish named Nemo was the impetus for another blockbuster. 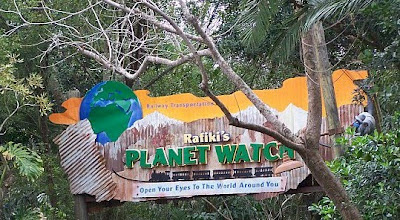 This theater show easily rivaled Festival of the Lion King in scope, execution, and popularity. Along with new music written specifically for the production, the combination of artistry and puppetry guaranteed this musical was now on the must-see list as well.

The park continued to evolve. In Asia, the beautiful and very expensive Yak and Yeti restaurant opened alongside a counter service version to help crowds looking for a meal. Africa's Tusker House, unfortunately, became a character dining location, robbing park guests of one of the best park offerings unless they paid the ransom required to dine there.

In one of the oddest moves ever for a park struggling with things to do, Disney management closed the small animal show themed to Pocahontas, and in its place opened absolutely nothing. Speculation suggested a new attraction on its way. Reality offered nothing of the sort.

OUR JOURNEY CONTINUES- The next visit: almost 10 years later...

Due to a series of unique circumstances, I was able to visit Animal Kingdom three times, twice in 2006/7 and once in 2009. Much had changed since my first experience in 1999. 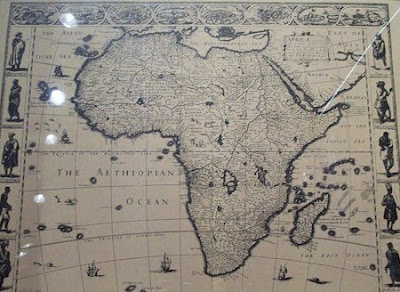 Interestingly, the first new visit was with some friends who had not previously seen the park. This afforded me the opportunity to view it with new eyes. 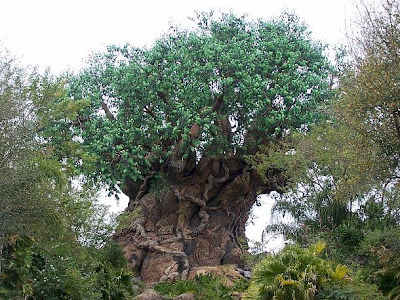 The jungle had grown much lusher than before, and this trip's view of the Tree of Life was as stunning as the first. Crowds were thick and wait times were heavier than the park could handle, but this still did not stop guests from departing around 3pm. Expedition Everest was an expected favorite, and multiple rides did not diminish its greatness. Lunch was delicious at the still uncharactered Tusker House, and our early evening snack at Flame Tree Barbecue ended our day at 5pm. We let our teenage sons go back to the hotel pool, while the adults enjoyed a little quiet time at the Animal Kingdom Lodge.

The following year's trip was a gift from my wife. Four days in Orlando solo to end my work sabbatical. One day was spent at Coco Beach, one at Epcot, one at the Gulf Coast and one at Animal Kingdom. (I ended with a half day at Islands of Adventure.)

Touring Disney's Animal Kingdom alone was a very unique way to see the park. My inner geek thrilled at the thought of exploring the minute details to my heart's content. The reality was what I thought, but I also missed my wife! (I'd take care of that in 2009!)

Arriving at the park before opening gave me the advantage of immediately riding Expedition Everest, grab a Fastpass for an additional ride later, and journey on Kilimanjaro Safaris all before breakfast. What a way to start the day!

The rest of my time was spent leisurely touring, indulging need to explore every nook and cranny. I finally discovered the famous "hidden path", found some beautiful waterfalls seen on previous trips, and explored the inside of every shop and restaurant. By the end of the day, I had experienced just about every park attraction, including the new Nemo musical.

The last visit was a bit over a year ago- and the overall effect was disappointment. I've detailed this in an earlier post (here), but let me say I saw Disney's Animal Kingdom in an entirely different light. We ate at Yak and Yeti and dropped a bundle to do so. Finding Nemo: the Musical was terrific. I still found Expedition Everest as thrilling as ever, but I also discovered the naysayers were right. There's just not enough to do! Maybe my next visit will be different.
--------------------------------------------
A decade later, Animal Kingdom still bears a strong resemblance to its opening day presentation. There is still an early closing time, too few attractions, few places to eat, and too many theater presentations. It remains a half day park and fourth on my list compared to Epcot, the Magic Kingdom and Disney's Hollywood Studios.

However lofty the goals for this park were at conception and initial execution, during a decade with mixed results both creative and financial, Disney Imagineers eventually came to their own revelation: the beautiful Animal Kingdom park is primarily a business investment, and it has to be tended to with much care to maintain both its integrity and monetary success. My bet is that Disney never again opens a park with live animals as its focus. The work involved and the intellectual investment is just too high a price for the payoff.

What is next for this marvelous looking but still somewhat lacking park? Only the suits and Imagineers at Disney know.

The success of Harry Potter and his wizards at Universal's Islands of Adventure may be this park's strongest advocate. Competition always brings out the best in Disney, loosening the purse strings and the creative juices. Things seem at a standstill as the Company is unsure of the park's direction, and they are reluctant to throw more money at it until they must.

Should Disney move into reactionary mode, strong contenders for new attractions seem to be an animal area focusing on Australia, although some die-hard fans still desire a version of Beastly Kingdom. My bet is Audio-Animatronic animals win this time. South America is also uncharted territory. Many Disneyphiles are concerned about the infusion of animated characters into the parks, feeling Animal Kingdom is the next to be infected even more by this trend. Time will tell, but the success of Nemo may direct the future.

Regardless of future plans, some things are certain: Disney will continue to compete with its neighbors, Harry Potter or otherwise; Imagineers will design attractions that inspire while Disney executives direct the park’s course based on guest attendance and spending.

Lastly, Disney's Animal Kingdom will continue to connect with many guests. The superb craftsmanship at the park is unrivaled in the States. More importantly, due to man's deep love for animals, a spirit of adventure, and his longing for connection to the Garden where he began, this wonderful, creative place will bring us back again and again.
(Photos copyright Mark Taft.)
Posted by Mark at Thursday, April 22, 2010