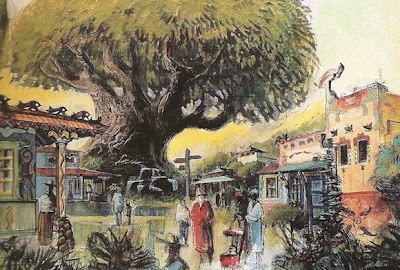 The Animal Kingdom team continued to grow as the models and paintings took more and more space in Imagineering’s offices. The group’s hard work and brilliant design paid off. After five years of effort, the plans and funding were approved. The park was announced to the public in June of 1995 with the expected Disney fanfare. The official opening day would be April 22, 1998- Earth Day, an intentional choice that strongly communicated this was a Walt Disney World park designed for a young and conservation-minded fan.

With the mention of live animals, activist groups were quick to jump on the news, denouncing Disney’s plans as evil, long before any of them had enough information to realize great care had been taken. Disney had chosen to work with the foremost experts of the animal care field in developing environments and programs before unseen in the zoological community. (In actuality, few protesters arrived on opening day, much to the relief of the company and its press agents. My personal hunch is that many of these same folks are now among the park’s biggest fans!)

Disney’s Animal Kingdom is as vast and overwhelming a project as EPCOT Center. In some ways, this was EPCOT, only with animals replacing people as its inhabitants. The facilities were light years ahead of the norm, the concept just as much a departure from the expected Disney park, and the executed design equally surprising, forward thinking and delightful. 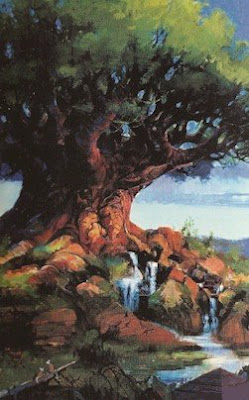 With a large crowd gathered in the parking lot, the Grand Opening ceremony was finally scheduled. Amidst African musicians and dancers and the obligatory speeches, Michael Eisner opened the park to its special guests:

“Welcome to the kingdom of animals, real, ancient, and imagined. A kingdom ruled by lions, dinosaurs, and dragons. A kingdom of balance, harmony, and survival. A kingdom we enter to share in the wonder, gaze at the beauty, thrill at the drama, and learn.” 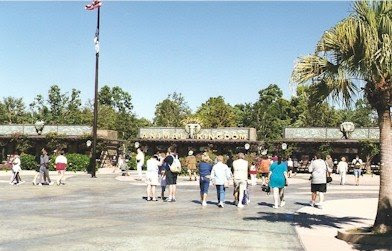 Although cheers and applause were to be expected from the relatively few invited guests, including the Imagineers and their families, it would be the reaction of the general public that the Disney suits were most closely awaiting. In their favor, the park had somewhat of a built in audience by those coming to Florida for a week long vacation, and the ease and relatively inexpensive option to add another day on their multipark ticket would encourage a visit. Working against them, Disney realized much skepticism had to be overcome. Most importantly, the question of whether or not this was just a zoological park with Disney characters thrown in for their drawing power was waiting to be answered. The park opened, and the public gladly entered through its gates. 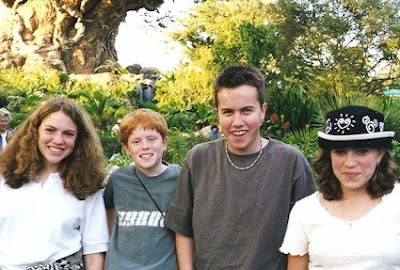 Unpredictable, unscripted, ever changing. This was what the designers wanted to accomplish- and they did. Once crossing the turnstiles, we were surprised by what we encountered. Guests like my family expected a traditional zoo environment or yet another version of Main Street and were taken aback, finding a lush jungle instead. This was all that could be seen. There was no icon to be gazing upon, no ride vehicle or transportation system in sight, no vendor cart. We could hear the rustling of some animals but could not seen them aside from a few well placed tropical birds. We would have to do some exploring to uncover what was here. The air of mystery the Imagineers strove to create was present, subtly communicating this wasn't just another zoo or your parent's Disney park.

We wandered through the dense gardens until the beautiful Tree of Life came into view. Then like many visitors, we stopped and gawked, the unexpected panorama unfolded before us. The gardens and waterfalls surrounding the tree drew us in. Upon discovering the multitudes of animal carvings in its trunk and branches, we immediately began the game of uncovering its treasures. It is a gorgeous piece of art! 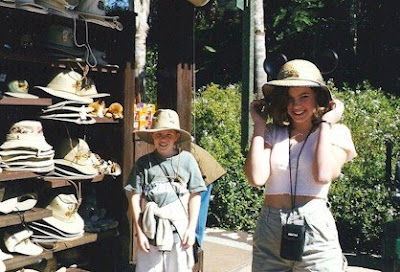 There is always time on a family vacation for some photos and fun! 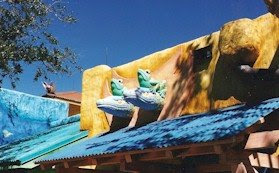 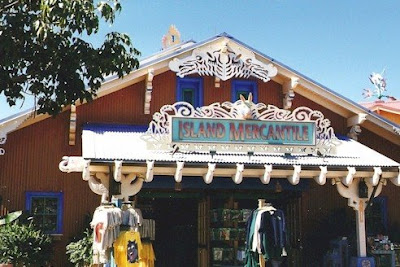 The shops were beautifully designed, inside and out! 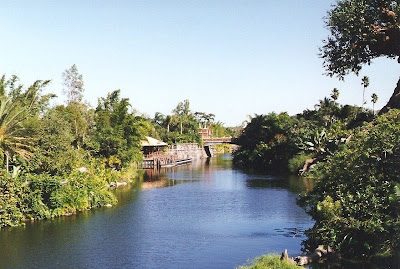 For the time being, we were satisfied by what we had found, and we were now to go on safari to see the animals of Africa. We strolled through the colorful village on Safari Island and found the bridge leading to the Dark Continent. Crossing over, we spied waterways leading to adventures unknown, but we pressed on into Harambe. 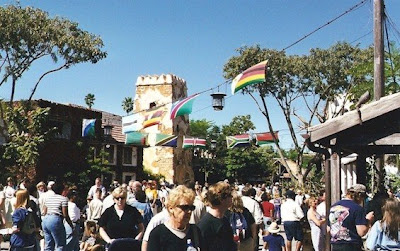 It was a far different feeling seeing a true-to-life Africa versus the fantasy version we were used to at Disneyland and Florida's Magic Kingdom! The sense of realism made Animal Kingdom much more like a living World Showcase pavilion from Epcot. 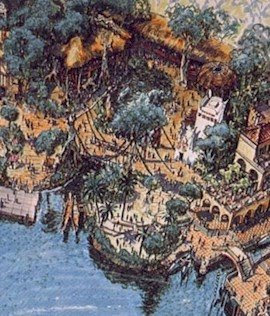 
The attention to detail is what we expected here, but the end result was entirely different. The architecture included power lines, handbills, and traffic signs. The plant life was abundant and less manicured. However, it was the interactions with people actually from the continent that made the most impact. Between the folks working in the shops and restaurants and the abundant musicians, it was easy to suspend reality. Harambe was stunning in its scenery and authenticity. 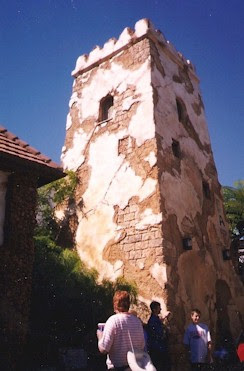 However disarming the views, it is here that the serious message of conservation comes into focus. The park’s signature attraction, Kilimanjaro Safaris, takes up approximately 100 of its 500 acres. In this African town, which takes minor design elements from Epcot’s unrealized Equatorial Africa pavilion, its citizens make their living from eco-tourism and coexist in peace with their surroundings. The safari attraction itself contains a focus about the real evils of poaching, subtly weaving its important message among the views and the thrills. 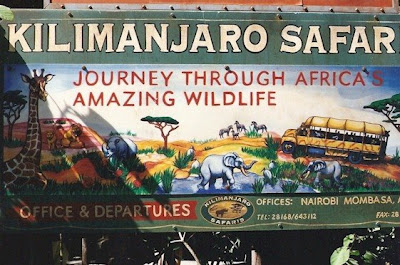 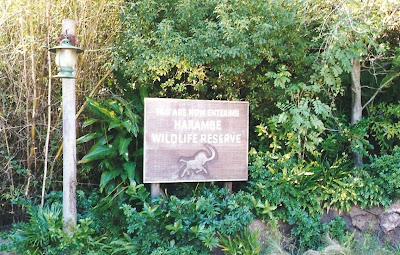 We jumped in line and tried to be patient as we waited for our twenty minute journey in the wild. Televisions overhead taught us about the beautiful landscapes and animals we were about to see. We were encouraged to respect the earth and its inhabitants. The animal close-ups were thrilling, and we couldn't wait to have our own. 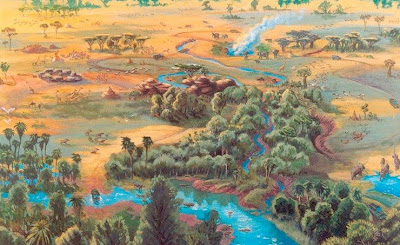 The first ride on a new Disney attraction is always exciting, and this was no different. We jumped aboard our truck, positioned ourselves, and pulled out our cameras. When our guide began to speak in a very beautifully African accented English, I knew this would be something special. It was.

Surprisingly, due to the bumpy road we traveled, it was very difficult to photograph the animals. I eventually decided to stop shooting and just enjoy the surroundings. Wise move! The vistas were astounding, and it wasn't until we were about half way through that I remembered we were in Central Florida! The Imagineers had done an amazing job of bringing to life another far off locale, and I was lost in what they had created. Since the animals were of the decidedly nonrobotic kind, just watching them was fascinating. 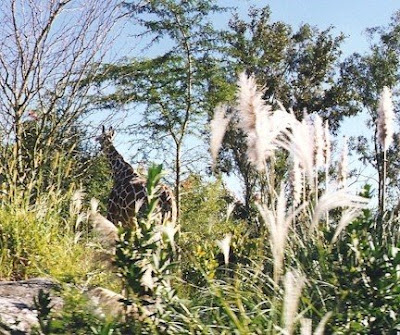 The trek continued and the landscapes and types of animals changed. From the plains to the dense jungles, animals were everywhere, and God's creation was in full glory! It was such a beautiful experience that I wanted this safari to truly continue into the "two weeks" that was originally promised at the depot. 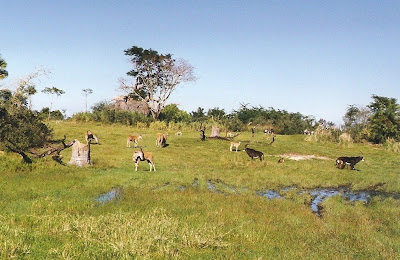 Above, I left this photo very large so that the readers can get a sense of the openness and size of the great African savanna.


After a wild chase to thwart some poachers, thus protecting the animals and the people of the land, we were safely back in Harambe. The conservation message was firmly in my mind and in the mind of my children as well. We were thrilled with what we had experienced, yet the education process had begun.

I was surprised by this, but I should not have been. Michael Eisner said at the dedication Disney's Animal Kingdom was designed as " a kingdom we enter to share in the wonder, gaze at the beauty, thrill at the drama, and learn." The Imagineers were holding up their promise in all respects, and there was much more of wonder, beauty, thrills, and learning to behold.
---------------------------------------
This is the end of Part Three in this ongoing series. Hope you've enjoyed it! The next segment will continue with more of the tour, guest reaction to the park, and Disney's plan.
Starting on May 1, watch for an entire week's worth of posts celebrating and the largest ever expansion in Walt Disney World's history!

Culminating with the opening of Disney-MGM Studios, the previous year was a season of tremendous growth. From the Studios, Pleasure Island and beyond, Insights and Sounds will bring you original vintage photos, trip reports and concept art.

Nice story and some beautiful artwork I hadn't seen before. AK is my favorite park... needs work (Beastly Kingdom, Ice-age mammal ride in place of DinoRama, some improvements, fresh paint and rehabs all around), but the park remains an extraordinary place.

Thanks, Randy. I love this park, too, but after my last visit, I can see where it needs something.