Another Look at Legends of the Fall 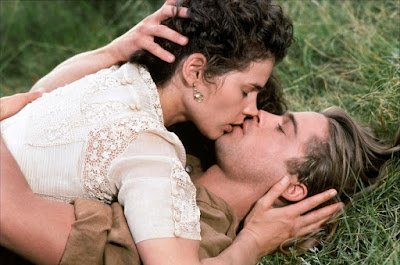 Beautiful in its sadness and despair, stark in its portrayal of the frailties of life, the classic film Legends of the Fall (1994) stars Brad Pitt, Anthony Hopkins, Aidan Quinn, and Henry Thomas (now all grown up from the movie ET). Every one of these Ludlow men are seriously impacted by the lovely, charming, but emotionally unstable Susannah, brilliantly played by Julia Ormond.

As part of my Lufthansa film festival on the way to work overseas, I decided to take another look at this powerful and disturbing film. I was awestruck by the cinematography by John Toll. His sharp eye at capturing the stunning, and at times deadly, landscapes sets the scene for the immense drama of this family torn apart by love, lust, and passions of various kinds. Even war is savagely beautiful under his watch.

Although Ormond and Pitt seem to be the centerpiece of the film, none of the actors are lost as second hand characters. Aidan Quinn and Anthony Hopkins are first rate. Even actress Karina Lombard turns a relatively small role into one worthy of remembrance. (Speaking off small roles, Friends actress Christina Pickles makes an appearance as the mother who leaves the West behind.)

This is the kind of film worthy of discussion due to its powerful themes of love, life, and death. It's a whole different world than the one delivered to us by most film makers today. Escapist fare like Marvel and Star Wars may be popcorn worthy fun, but in a season when Pixar creates some of the most heartfelt and compelling movies, its assuring to know that powerful films such as Legends never really go out of style.
Posted by Mark at Thursday, October 04, 2018