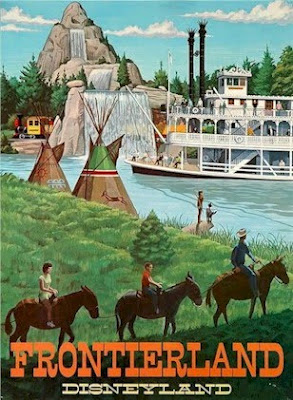 Disneyland's Frontierland has seen so many changes, it is almost impossible to keep track!As one of the original lands in the original kingdom, Frontierland had so much of Walt in it. This was a good thing as Walt Disney was a man who loved the United States of America, appreciated its history, and had respect for the ideals on which it was founded. This deep sense of patriotism permeated the area. 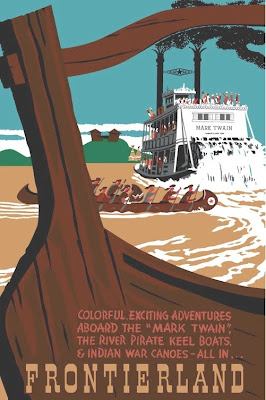 The earliest incarnation may have been politically incorrect in its reference to America's native population, but the presentation of frontier life for both the natives and those who explored beyond the citified country was handled with sincerity, dignity, and honesty.Unlike Golden Dreams, the film presentation found in the all too trendy California Adventure park almost 50 years later, Walt saw no need for making a statement, instead he choose to simply honor those who had gone before him. 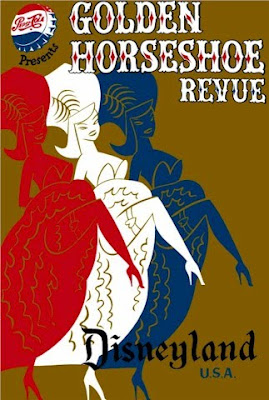 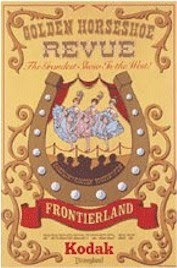 First and foremost, Walt was a showman, and he never forgot the main purpose of Disneyland was to entertain and delight his guests- and Frontierland was stuffed with attractions! From the mighty Mark Twain Riverboat to the smaller Mike Fink Keelboats, river travel was highly encouraged. After journeying through the stockade at the entrance, the beautiful Golden Horseshoe Revue reigned as the ultimate expression of frontier frolic. In short, there was something for everyone. 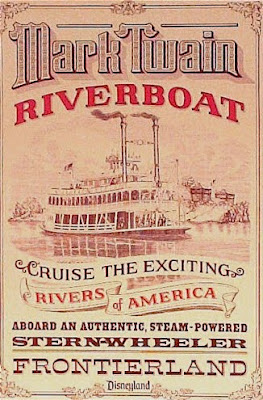 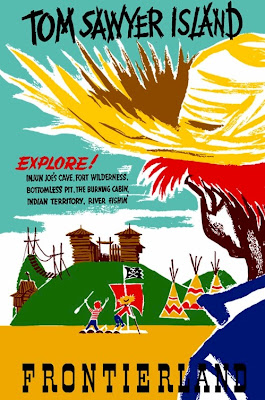 Once Tom Sawyer Island opened the following year, kids of all ages had a totally different way to play. Caves, grottoes, Fort Wilderness, and suspended and floating barrel bridges were among the offerings awaiting kids anxious to burn off some energy in a very unstructured way. 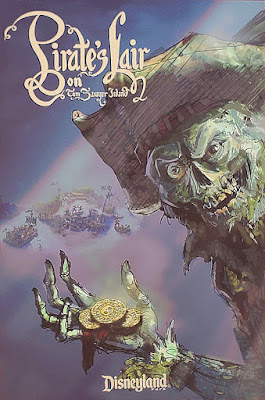 Love it or not, in 2007, pirates invaded the island full force, partially to capture the love of the Pirates of the Caribbean film series starring Johnny Depp. The island was due for some help with many of its elements being closed or having lack of maintenance- but fans did end up with this great poster. 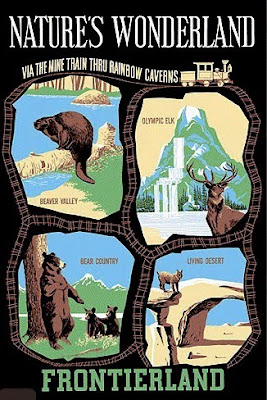 Come a few years later, the area would receive its largest expansion at the debut of the Mine Train Thru Nature's Wonderland. It was an instant fan favorite. Although the flora and fauna couldn't have been more different, and creatures on display from another continent, this attraction was the American Frontier version of Adventureland's Jungle River Cruise. 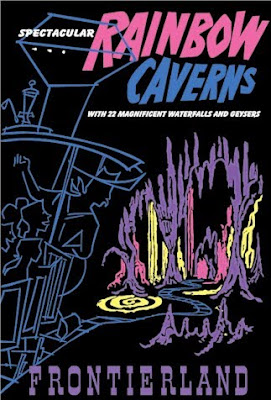 The rickety old train ventured through the barren deserts and its paint pots and spouting geysers. When in the lush valleys, the passengers were treated to bears and beavers and other wide life. The carefully planned excursion provided close up views of native animals in realistic and awkward, sometimes funny, situations. Much of the same humor of Imagineer Marc Davis is found here. It was a fine example of the genius of Walt Disney and his Imagineering crew to vary the experiences along the way.

They did, however, save the best for last, as the ending was an absolutely spectacular journey through the mysterious Rainbow Caverns. Waterfalls of all colors spilled around stalactites and stalagmites- everything punctuated with sounds from an ethereal choir. Magical! (Note: Find the Disneyland 50th Anniversary CD collection for the full narration. Retro fun for everyone!) 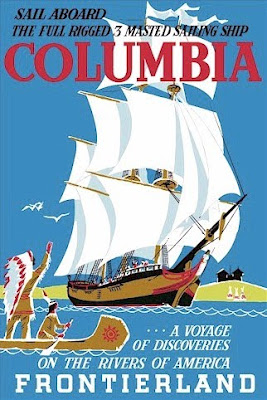 Also found in the Wild West were the requisite Shootin' Gallery, the originally named Indian War Canoes, and since 1958, the Sailing Ship Columbia brought yet another way to cruise the Rivers of America. This river was full of activity- a wilderness world on the move! 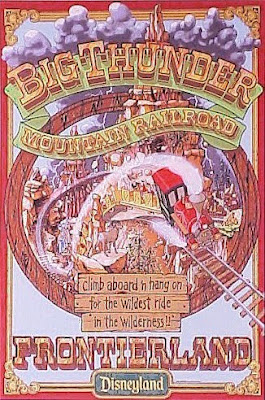 As I mentioned earlier, Frontierland was always changing. Even the gorgeous Nature's Wonderland gave way to Tony Baxter's thrill ride disguised as a scenic tour, Big Thunder Mountain Railroad. (The hard to find poster is above.)

Make no mistake, this attraction is a strikingly beautiful piece of work. It's full of the detail and fun found in groundbreaking attractions like Pirates of the Caribbean and The Haunted Mansion. It's just unfortunate that there is now no way for guests to tour the beautiful landscapes without the coaster thrills.


More change was soon to come. On the farthest side of Frontierland at the distant bend in the river, the Indian Village celebrated Native American culture and life. Unfortunately, this was also on the cutting block, eventually giving way to the new Bear Country. The Country Bear Jamboree debuted in 1972. It was a fun musical show, but an important piece of Americana and the heart and soul of Disneyland was lost in the transition. As beloved as this show is (in Florida and Tokyo) /was (at Disneyland), the change signaled a move away from historic based attractions to ones which seemed to showcase the latest of technologies and characters just for the sake of being able to do so. Certainly, the Imagineers could have found a way to leave the teepees and tribal dance performances somewhere in a land which celebrates the American frontier! 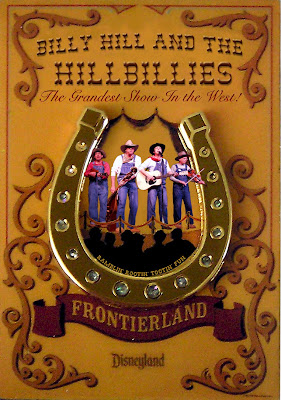 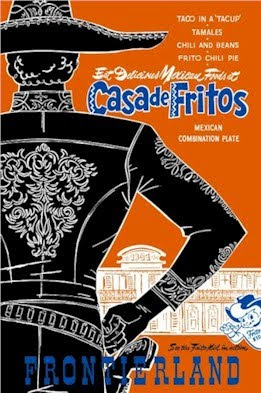 Since the opening of Big Thunder Mountain, the changes have been few and small- aside from the Pirates Lair addition to Tom Sawyer Island. Overall, I found it to be quite well done and a strangely fitting combination of both Frontierland and New Orleans Square, on whose land the dock actually sits. On the entertainment front, Slue Foot Sue turned over the lease of the Golden Horseshoe to Billy Hill and the Hillbillies. They are good- but something about can can girls and the Old West seems more fitting. 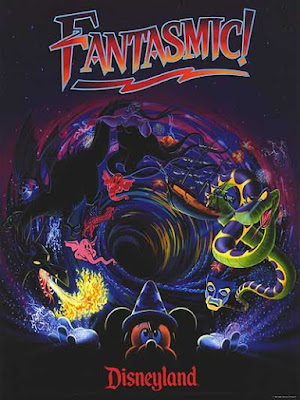 In 1992, Disneyland premiered one it's most loved evening shows: Fantasmic! Since it takes place on the Rivers of America and uses parts of Tom Sawyer Island, it seemed most appropriate to display the attraction poster here. 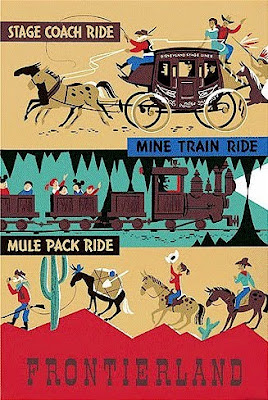 Change could still be on the way. Walt Disney Pictures has announced their intent to create a film series on the Lone Ranger, starring Johnny Depp as Tonto. This could be an excellent opportunity to revamp and retune the unbuilt Walt Disney World attraction, Western River Expedition. It would be a terrific way to bridge the movie and interest a new generation about life in the Wild West. Frontierland could have new life and atmosphere, something it has lacked in its current incarnation. As beloved as Pirates of the Caribbean is for local audiences, I can only image they would wholeheartedly embrace another attraction of this caliber. But could the somewhat stingy accountants at the Walt Disney Company stomach the investment?

Mark - You won the prize of the plates for my blog. Can you shoot me an email and let me know if you are interested and if so, your shipping address? dvdpicasso@aol.com