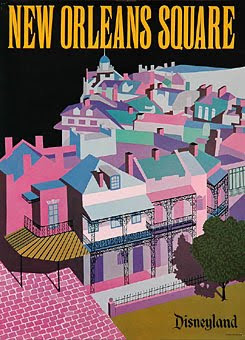 By the middle 1960's, it was apparent that Disneyland was in fact a hit with the public and not the sensational disaster many pundits predicted. To say Walt Disney was pleased would be a gross understatement. The park was his baby and his delight.

The 1963 opening of The Enchanted Tiki Room in Adventureland proved the success of Audio Animatronics, only showing guests would gladly partake of this new entertainment tool. Walt had other big plans on the horizon: Pirates of the Caribbean was in development as well as the long rumored Haunted Mansion. They would both find a home in New Orleans Square, the most elegant of all Disney lands.

Opening in the summer of 1966, New Orleans Square perfectly showcased the art of Imagineering. Certainly the architecture of this Paris of the new world had already been established with the original, but it was the blending of story, detail, and the opening of the two most celebrated attractions in Disney history that made this expansion the gold standard for theme park excellence. In fact, in this writers opinion, World Showcase at Epcot owes its very existence to the success of the work of the Imagineers in this project. (If you have followed this blog for any time, you may have noticed no other Disney developed land gains as much respect or love as New Orleans Square!) The poster above captures a small bit of the feel of this area. Admittedly, I had not remembered seeing this before but was delighted to happen upon it. 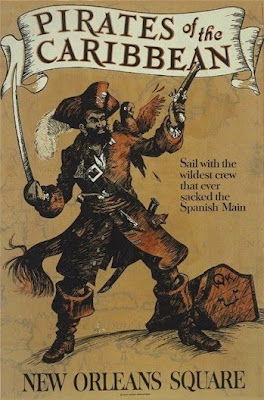 Pirates of the Caribbean. The name may now conjure up Johnny Depp playing Captain Jack Sparrow, but in 1967, the honor of instant name recognition went to this Disney theme park attraction. Sadly, Walt Disney had died only months before its debut. He was unable to see the reaction of park guests or those of the media, but suffice it to say, few accomplishments of Imagineering match this attraction even as it approaches its 45th year of existence! The great Imagineer Marc Davis devised this iconic poster for the attraction's opening. 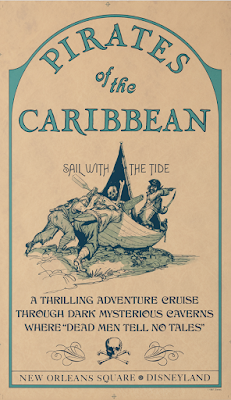 As you approached the attraction and entered the queue, guests found this poster (above) detailing what was to be experienced.

The above newer poster has me a bit stumped. I believe it to be a copy of the poster that was designed for Walt Disney World's Magic Kingdom version of the much demanded attraction, perhaps making its debut years after that park's opening in 1971. Even Jason Surrell's excellent book on the attraction- Pirates of the Caribbean: From the Magic Kingdom to the Movies- does not seem to mention this. Any clarification, readers? 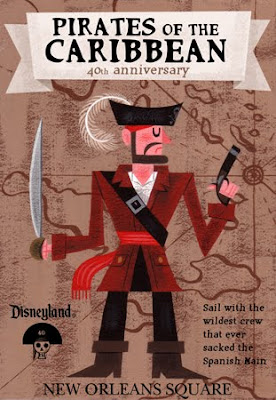 For the attraction's 40th anniversary, a new poster was developed. Now, I have only seen this used for merchandise, never displayed under Main Street's Railroad station. The child like portrayal is appealing in the most simplistic of ways, but it certainly does not convey the sophistication of the attraction or its impact on Disneyland or future Magic Kingdoms! Will there be another new poster to celebrate the landmark attraction's 50th anniversary? I can only hope! 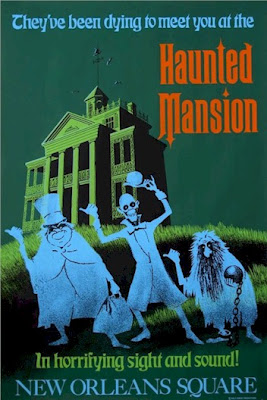 In contrast to the poster-celebrated Pirates adventure, I find it odd that the equally renowned Haunted Mansion has had only one piece of artwork per park to advertise its many charms.

Again, around the time of the opening of the Enchanted Tiki Room, the exterior building was complete for this attraction which would take a humorous look at paranormal activity. It wouldn't be until six years later that the house would be open to those willing to explore it, and the sheer curiosity factor almost guaranteed the attraction's success. Guests were dying to meet the inhabitants, and the adventure was an instant smash from opening day. As a youngster, I was there that summer. The line seemed as endless as the hallway inside the mansion.

Perhaps this poster was so effective in conveying the mix of mystery and fun that it never needed to be improved upon. Florida's Magic Kingdom version opened two years later with an entirely different exterior and a slightly altered poster showing the Gothic mansion in the background. I must say that a new version of the poster would be apropos for the seasonal Haunted Mansion Holiday, and I would welcome it to my collection. 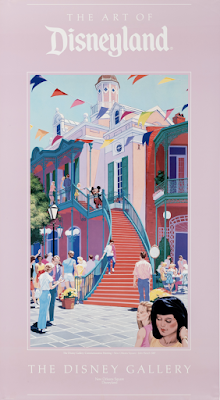 Although the Disney Gallery would be the only attraction to open since the Haunted Mansion- and it could rightly be called as much as shop as an attraction- I have not seen a poster for it, although I have heard that one existed. Finally, one of them came to light! 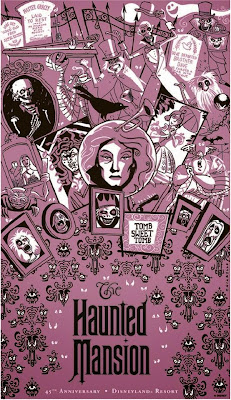 New poster addition: August 2014. The suits decide to "celebrate" 45 years of the Haunted Mansion. Let's be honest: Celebrating 45 years of the Haunted Mansion at Disneyland is mainly a cash grab. Why not wait for the 50th? That said, this poster is something worth looking at as it captures many ideas and images of the famed New Orleans Square attraction. Even with the infamous wallpaper as a background, it's still not very elegant. Kind of like the recent remodeling of Club 33 and what they have done to the exterior buildings that were involved.

In spite of an absence of new additions, New Orleans Square remains the ultimate Disney land in the most rich of Magic Kingdoms. Its beauty is as understated and elegant as its attractions are spectacular, making it a must-see for every visitor. From the beautiful landscapes of the south, we'll move on to the fantasy realm of Critter Country. Stay tuned for the next post in the series.

Actually the second Pirates poster you showed was designed for Tokyo Disneyland if I'm not mistaken, and then used at both DIsneyland and WDW with the land and park name screened in at the bottom.

The Pirates poster they use for Disneyland Paris (not shown in your blog) is still my favorite!

Eric- thanks for that bit of news. I had no idea.
Rob- I', planning on showing the DLP poster when I cover that park's attraction posters. I love it, too.

Does anyone know where I can purchase the New Orleans Square poster?