The adventure lives on! Today is the day Indy fans worldwide have been waiting for! Between now and the time of the first showing today of Crystal Skull, I thought it would be interesting to take a look back at how Indy attractions have impacted the Disney theme parks. (As usual, some photos and any concept art are property of the Walt Disney Company.)

As a new Chief Executive Officer, bringing Indy into the parks was among the first and wisest decisions Michael Eisner made. Although it would take a few years for the attractions to open, it brought instant name recognition- and a sign that Disney was serious about reaching audiences who had previously deemed Disney parks just for kids. With the upcoming opening of the new Disney-MGM Studios in 1989, the timing for this partnership couldn't have been more perfect.

First up was an Audio-Animatronics Indiana Jones, appearing in the Great Movie Ride at the brand new park. This was quickly followed by another attraction in the same park, the full blown Epic Stunt Spectacular, a 30 minute show highlighting several stunts from the films. 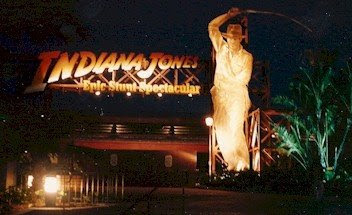 Our first visit to the Studios was during the opening year. The park was small but well laid out. The Great Movie Ride was fun and suspenseful. We just happened to walk by the Stunt Spectacular building and were asked to come in for a pre-opening performance. Even with the stopping and starting and minor technical difficulties, the show was a family favorite. 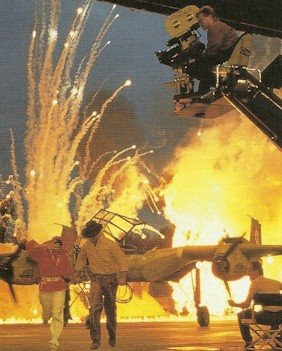 While these additions in Florida were highly entertaining, the best had yet to occur- and would come to fruition on the West Coast at Disney's original park. The Indiana Jones Adventure premiered in 1995, becoming an instant hit and a groundbreaking critical success.

At the time, I was employed by AT&T and was blessed to be chosen to receive a fairly prestigious award. The scheduled ceremony was held in Newport Beach during Indy's opening weekend. Since our company was the attraction's original sponsor, one of the optional activities was to go to Disneyland and experience this major new addition. It was one of the easiest decisions I have ever had to make! 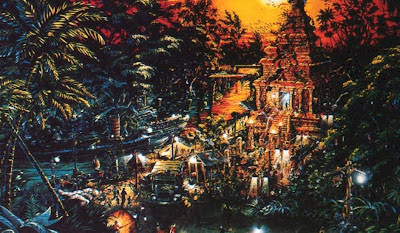 Between the expected awards ceremonies and parties, I was free to go to the park that Saturday. Admission was free, but it did not include front-of-the-line privileges. No matter. Enduring a three and a half hour wait for my first ride through the Temple of the Forbidden Eye, the time seemed to go quickly and slowly all at once.

The queue extended out from Adventureland into the plaza, wrapping around and passing by the entrance to Frontierland. When we still lived in California, I was at the opening of Captain Eo and Star Tours years before, but never had I seen anything like this! People in line couldn't stop talking to their friends and total strangers about how much they wanted to ride. Folks were getting off the ride, talking away excitedly, and turning around to get back in line for another journey! Everything about this day was just amazing, and the attraction lived up to the hype and my anticipation.
Finally being able to see the temple for the first time, I just couldn't believe my eyes! It all fit in so flawlessly, as if it had always been there. The camp set-up added to the atmosphere, watching the Jungle Cruise boats sail by added to the suspense. 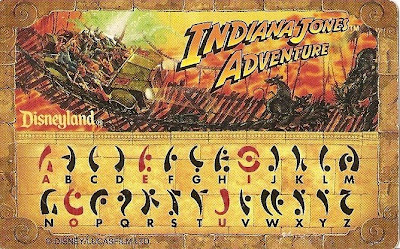 Snaking through the queue and into the temple (pun intended), we were given a decoder card to translate the ancient language inscripted on the walls. The detail was so lavish throughout that I almost wished I had more time to take it all in. 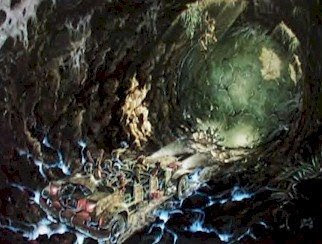 As I got closer to getting in my "troop transport", watching folks return from their adventure and bursting into applause made my heart race with anticipation. Remember, this was before the web was used as a tool to share pictures and concept art and trip reports from the parks. I had heard next to nothing about what was inside but had only seen a promotional picture of the jeeps racing over a rickety bridge passing the fiery cavern. My maiden journey thrilled me to no end- and the rest of our jeep as well. We, too, starting hollaring and clapping as the ride came to an end.

Before I ran back to the line for my second journey, I hopped over to the Disney Gallery and purchased a signed print of the attraction's concept art- which hangs in my office to the is very day. All I did was ride Indy that day, getting in a third trip before I left, as crowds finally started to thin.
Years later, I would discover that the Indy attraction was potentially considered to be an assortment of Indy attractions. (Concept art above.) I was disappointed that this didn't make the cut, but what we did get is still one of my favorite attractions in any park. Needless to say, I absolutely love this attraction- and whenever I make a visit to the original kingdom, it and Pirates are the only ones that are always on my must-do list. 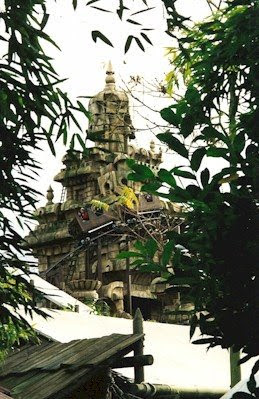 The next Indy incarnation was across the globe in France. Visiting Disneyland Paris in October of 1998 was a treat all its own. We had saved and planned to go to California to visit family, but when innaugural flights from Denver to London were sold for $99 each way- less expensive than Denver to Los Angeles, we were able to take our whole family overseas for a very "jolly holiday". (London is a wonderful city- and very kid friendly, by the way. Paris and all of France, too.) We'd seen the opening of EuroDisneyland several years prior, and I was drooling as I watched the telly. Praying God would let me go one day-really, as I just had to get over there and take a first hand look at this amazing park. Knowing this attraction was a coaster, and having visions of an Indy version of Big Thunder, I expected it to be spectacular. This time, however, I would be sorely disappointed. The hour and a half wait moved very slowly through the camp area, and finally walking up the temple steps, I realized I was seeing folks return to the station very shortly after leaving from it in their ore car. It wasn't long before I realized this was a very cheaply done ride. No special effects at all. Actually, this was my only disappointment in the entire park. The rest of Disneyland Paris mesmerized me. The one redeeming factor of this attraction is the great views of the park from the lift hill and before the first drop.

From Paris to Tokyo was the next leap in the park additions. Now, I have not (yet!) been to the Tokyo Disney Resort, but anyone with good vision can see that Tokyo Disney Sea has to be one of the most richly detailed parks ever built. It premiered in late 2001 with Indiana Jones and the Temple of the Crystal Skull already awaiting guests. This version of Disneyland's original "troop transport" attraction was filled with enhanced effects, a new storyline, and a south of the border setting in the Lost River Delta section of the park. Another hit. (Next door on the map above is the later addition of Paris' Indy coaster, but in Tokyo, it is not themed to Indy.)

In celebration of the new film, Disneyland will have a small stage show happening throughout the rooftops of Adventureland and some additional nuances to capitalize on the film's opening. That is all for the future on the Indy front- unless you consider the strong and recurring rumors of another jeep attraction coming to the newly named Disney's Hollywood Studios. The Disney suits need to make this happen. In my opinion, this will be one the attraction on the horizon to truly keep Universal's Harry Potter in check- and the clock is ticking. One thing is certain, if or when Indiana Jones Adventure Florida does come to be, you can be sure it will bring in the guests, and I'll be there as well!

(Art copyright The Walt Disney Company and all photos except the top copyright Mark Taft.)
Posted by Mark at Thursday, May 22, 2008

Anon: I so completely and totally disagree with you that it's not even funny. First of all, Animal Kingdom is about animals and with the exception of a snake or a random elephant, animals have played little part in the mythos of Indiana Jones. Secondly, Indiana Jones is a movie phenomenon. It belongs in a movie park just like the Ark belongs in a museum. And finally, separating Indiana from it's Lucas' property brother (Star Tours) would be a travesty. Wrong, wrong, wrong.

You're getting lost in the very minute details of the series and also forgetting the purpose of both Animal Kingdom and Hollywood Studios. Indiana Jones does *not* belong in Animal Kingdom.